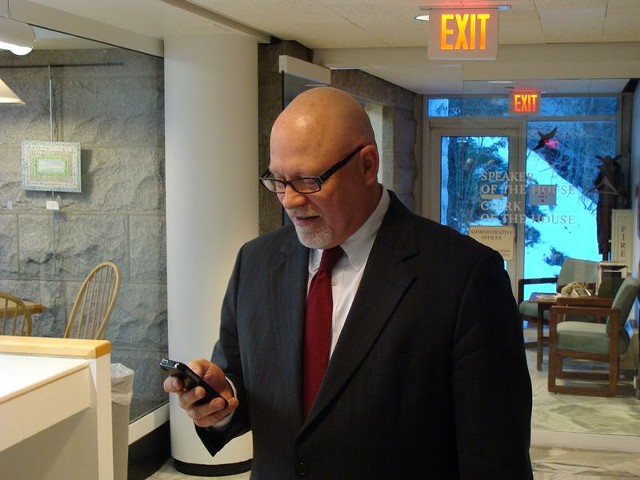 Demonstrating an apparent dearth of self-awareness, a Vermont-based "super-PAC" whose creation opened the door for super PACs to operate in Vermont released a statement Thursday decrying the influence of an out-of-state super PAC in Tuesday's primary election — and using the situation to justify its own existence.

Got it? Didn't think so. Let me take you back.

Six weeks ago, a liberal advocacy group called Vermont Priorities announced it was launching Vermont's first home-grown super PAC, allowing it to raise and spend unlimited funds on state elections. Why? Because the folks behind it — Vermont Priorities chairman Bob Stannard (pictured) and the group's consultant, KSE's Todd Bailey — were greatly a-feared that big, bad out-of-state super PACs would get all up in Vermont's otherwise pure elections.

By starting their own, way more awesome super PAC, Stannard and Bailey reasoned, they'd be ready to do battle with Karl Rove and the dreaded Koch brothers when those dudes inevitably came to town. Meanwhile, without all those pesky campaign finance restrictions, Vermont Priorities would able to raise and spend as much as they liked to elect their fellow liberals to office!

In order to test the waters and confirm that super PACs could legally operate in Vermont, Bailey hopped on over to the Secretary of State's office July 18 to officially register the new entity. It being the first such filing, Secretary of State Jim Condos sought guidance from Attorney General Bill Sorrell's office to determine whether super PACs can legally operate in Vermont.

Two weeks after that, on August 10, a Washington, D.C.-based super PAC called the Committee for Justice and Fairness — funded by the Democratic Attorneys General Association — plunged $99,000 into television ads supporting Sorrell's reelection bid. By the end of the race, the group had spent at least $184,000 on Sorrell's behalf, almost certainly pushing the attorney general over the top in his squeaker of a victory over T.J. Donovan.

In defending the legality of the Committee for Justice and Fairness' support, what did Sorrell cite? His own decision responding to Vermont Priorities' filing.

(It's worth noting that Stannard, Vermont Priorities' chairman and a lobbyist for the Vermont Citizens Action Network, was also a vocal supporter of Sorrell's reelection bid.)

"Earlier this week, Vermont held its first election that included the involvement of a Super PAC. The Committee for Justice and Fairness spent at least $184,000 in support of Bill Sorrell in the Attorney General primary, a race that Mr. Sorrell won by a mere 600 votes." said David Contrada, board member for Vermont Priorities.  "It is clear that large sums of out of state money have already had an affect on Vermont's elections. In Vermont, we want our elections to be decided by ideas and values not dollars. This is precisely why VT Priorities will work to eliminate Super PACs from Vermont elections." Contrada added.

So, to be clear: Vermont Priorities started a super PAC to ward away super PACs. But because they did so, a super PAC came to town. Now, they're arguing their work is necessary to "eliminate super PACs from Vermont elections?"

Replying to a request for comment Thursday afternoon, Stannard wrote by email that his group "did not create the landscape that led to Super PACs in VT," noting that the U.S. Supreme Court's Citizens United decision and other rulings "opened the door for them to operate in our state."

"It is fair to say that the board's preference would be that they did not exist but simply wishing for that would be sticking our head in the sand and hoping the issue went away like so many are currently doing with Climate Change. We have instead chosen to take action," Stannard wrote. "Whether we are the group that asked for legal clarification from the Secretary of State or the 10th or 100th group to be created in Vermont is irrelevant."