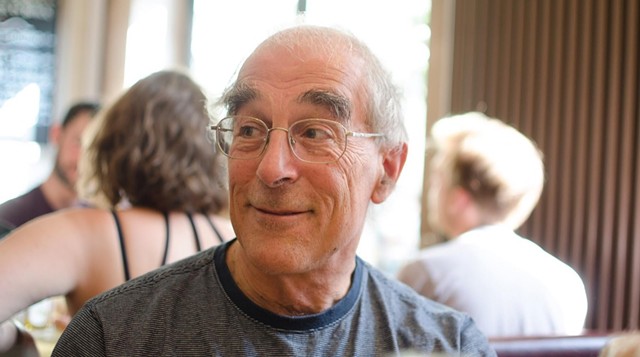 Note: This story and headline was updated after Gordon died.

A community radio station in Plainfield, WGDR, will broadcast a live show in tribute to Gordon on Sunday, November 14, from 7 to 9 p.m. The show will feature Village Harmony music and stories about Gordon's life; people can call the station at 454-7762 to share stories. Tune to 91.1 or 91.7 on the FM dial to listen to the show, stream it online at WGDR.org.

Larry Gordon had a deep bass voice and a love of singing — and he devoted much of his life to joining with others in song. Gordon, 76, had a particular fondness for shape-note singing, a tradition he worked to revive in central Vermont and beyond through Village Harmony, the group he founded in 1989.

On November 1, Gordon was in a bicycle accident (with no car involved) near his home in Marshfield, said Sinead O’Mahoney, a Village Harmony staffer and singer. Gordon suffered a brain injury and was on life support before he died on Tuesday, November 9.

As its name suggests, in shape-note singing the notes are depicted by a shape on the musical staff. The songs are often hymns or come from other religious texts; they're usually sung in four-part harmony.

“Larry was not a religious person,” O’Mahoney said. “He really loved good music, and a lot of that happened to be religious.”

Gordon was involved in numerous choruses and singing groups in central Vermont, including founding Onion River Chorus in Montpelier in 1978. But he is probably best known for his work with Village Harmony.

Its programs include a summer camp for teenagers who tour New England and travel and perform internationally. In places including Corsica, Georgia and South Africa, Village Harmony singers join with local people to sing shape-note music and songs from the region in which they're performing.

“We like to have really eclectic performances,” O’Mahoney said.

Last summer, due to COVID-19, a smaller version of Village Harmony formed: seven young singers and three adults. Instead of staying with host families, an arrangement that was unsuitable during a pandemic, the group camped at Vermont state parks and performed outdoor concerts.

“Larry’s got a very relaxed demeanor,” O’Mahoney said. “He’s demanding in the sense that he believes in his singers and is very encouraging. But he’s a very laid back guy.”

A Facebook group, Love For Larry Gordon, is filled with stories about — and tributes to — Gordon. They range from eating his pasta sauce seasoned with cinnamon to listening to teenagers who make music with him “singing at the top of their lungs.”

One person wrote: “Reading all of the stories, memories and experiences shared, seeing all the wonderful pictures, it's amazing to see the sheer size, breadth and strength of community that Larry did so much to create. I doubt even he grasped the true nature of the wonderful beast he unleashed.”
Prev
Next