I’ve attended many captivating performances at the Flynn Main Stage since the 1990s, but Saturday’s Grand Reopening Celebration was historic. The art deco theater was beautiful; the staff was friendly and well organized, as usual; and the performances were stellar. But Vermont storyteller Ferene Paris Meyer and Flynn executive director Jay Wahl moved me to tears. Their personal yet universal accounts of the past 19 months clarified the essential nature of gathering with neighbors in a beloved place for a live performance.

“Dear Flynn Theater!” were Paris Meyer’s opening words — the first spoken from the Flynn stage to an audience since mid-March 2020. Her story was part love letter to the theater, extolling its community-enriching capacity, and part memoir of her journey to develop her voice as a woman of color. She reminded us of the Black lives lost to violence and the requisite reckonings of the recent past.

A few minutes into her story, local chanteuse Nicole Nelson stepped onstage and began humming. I imagined she was the Flynn in human form, receiving love from the crowd and sending it right back, or an angel soothing our angst through song.

The Resistance Revival Chorus, a group composed of women-identifying and nonbinary Vermonters, traveled down the aisles holding candles to join Paris Meyer and Nelson onstage. They performed rousing songs that moved the audience to clap and cheer. Then guitarist Dwight Ritcher, violinist Daniel Bernard Roumain and drummer Ezra Oklan joined the group to rock the house.

I had never heard Nelson and Ritcher of indie-soul band Dwight & Nicole nor Flynn creative chair Roumain play live, and I was blown away by their effortless delivery and skill. Nelson’s soulful voice easily traversed octaves, and Roumain added touches of jazz and blues at just the right moments.

As the tech crew prepared the stage for Afro-pop superstar Angélique Kidjo, Wahl stepped into the spotlight. He first acknowledged that the Flynn sits on unceded Abenaki land, another reminder of cultural shifts that have gathered momentum during the pandemic. Then Wahl, who became executive director in January, invited us into his warm, clever, funny mind. It was his first address to a Flynn Main Stage audience, and it left me hopeful for the organization.

Then Kidjo took the stage in a flourish of powerful singing, badass dancing and colorful clothing. With drummers and guitarists from around the world, the four-time Grammy Award winner nailed everything, from her hits “Batonga” and “Malaika” to a few salsa numbers and “Burning Down the House” by Talking Heads.

I treated my 15-year-old niece to the show for her birthday. A singer herself, she said she’d never heard music like Kidjo’s. The perennial Flynn favorite had us clapping, dancing and singing choruses as she burned away our struggles with infectious energy and joy. Roses flew onto the stage — and so did one man from the audience who just had to dance with Kidjo. I could relate.

Kidjo’s electrifying performance inspired a standing ovation — and an encore. We then began shuffling out of the theater only to find another performance waiting in the lobby. A water fountain and two trees had materialized — and were moving. Each was actually a person dressed head to toe in an intricate costume.

The tree people, covered in green foliage, were on stilts and holding extenders so that every slow movement of an arm or leg looked like long, sweeping branches. The animatronic water fountain, dressed in white with water streaming out of its gloves, gracefully shifted from pose to pose like a Greek goddess. We were stunned and fascinated, our own movement out of the theater stalling as we took photos and videos and shimmied to tunes by DJ Chia. 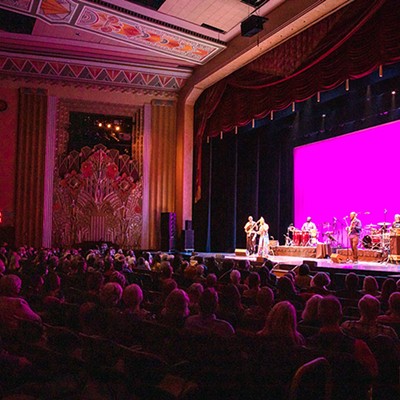 The Flynn's Grand Reopening Celebration on October 23, 2021
By Elizabeth M. Seyler
Click to View 11 slides
The reopening celebration had a hefty price tag: $125 per ticket. But 850 people, more than half the audience, saw the show on the house. Ticket proceeds supported a lottery that subsidized those free seats, wrote Wahl by email. He added that everyone who registered for the lottery but didn’t receive a ticket for Saturday would be invited to attend a different upcoming performance at the theater. “Access is always a priority and we’re constantly looking at ways to make sure everyone has an opportunity to join us,” Wahl wrote.

Numerous other Vermonters helped celebrate the Flynn’s reopening by participating virtually in the U.S. premiere of  “A Portrait Without Borders.” The mural is composed of people’s faces, which robots from UK-based studio Kaleider are drawing on the walls of the Flynn gallery. Anyone can participate through November 3.

My niece texted me the day after the show: “Thanks again for bringing me to the Flynn. It was really fun!” We plan to see tap-dance powerhouse Ayodele Casel next, on December 10.
Prev
Next