Fifty stars painted white hang from cables in a frame of red, white and blue. Red lettering on 16 of the stars spells out Black Lives Matter. Atop the piece, which stands in a field in Middlesex, is the name John Lewis, rendered in black.

The installation for the late civil rights leader and U.S. congressman is at  Camp Meade,  which I visited the other day.  Its red letters shone against a  backdrop of trees. Curious about who made it, I emailed Russ Bennett, a co-owner of the property and an artist/builder. Bennett has been making things — music festivals, breweries, tree houses — since before "maker" was a title that conferred status.

“i’d like to get in touch with the artist,” I emailed Bennett, dispensing with grammar in my haste. “do you have contact info? maybe it’s you!?”

Bennett wrote back: “Yes, we made it, after John Lewis died and in the height of public awareness of police killings of black humans

“So yes you are in contact with the so called artist” (In his reply, Bennett dispensed with punctuation.)

I called him to find out more.

“I want people to think about the United States of America,” Bennett told me. “It’s a field of stars.”

He said he’s been thinking of changing the name on top of the piece once a month to honor “Black people who have gone before us.”

“I’m thinking it doesn’t need to be a memorial for one human being,” Bennett said. He suggested that he might recognize Muhammad Ali and Maya Angelou.

Talking to Bennett, I learned that the "we" in his phrase,  "we made it,"  refers to carpenters, craftspeople — makers — who work with him at  NorthLand Visual Design & Construction in Waitsfield.

“I’m the pencil,” Bennett said. “People that work for me, they make stuff happen. They make it become reality. Until somebody makes it into a physical reality, it isn’t anything.” 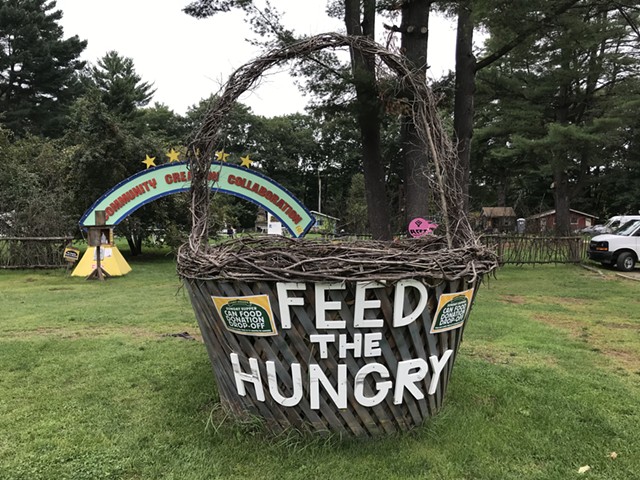 Bennett was also the pencil for a big basket labeled “Feed the Hungry” that stands near the Lewis piece. It’s a receptacle for food donations for Vermonters in need.

Past the basket  is a grassy expanse of private land that's  open to the public for use as a park. Bennett encourages people to have a picnic, practice yoga or throw a Frisbee — activities in which folks are "getting together and looking at each other instead of their freaking phones."

Red Hen Baking makes pizza in an outdoor oven on the property. The space has a concert stage and art pieces, including a giant yellow pencil. Bennett is the pencil's pencil.

“I think feeding people with art is every bit as important as feeding the physical body,” Bennett said.

Go to Middlesex with food for a hungry neighbor and put it in the big basket at Camp Meade.  Take a look at the stars in the red, white and blue frame while the leaves behind them are still green.

I told Bennett I’m a year late seeing the Lewis piece, which went up last summer.

“We’re all 400 years late on Black Lives Matter,” he said. “This is now. You can’t be late. It’s still an issue. We have to address each other as human beings.”

251 is a series of on-the-road stories, coming soon to a town near you.
Prev
Next