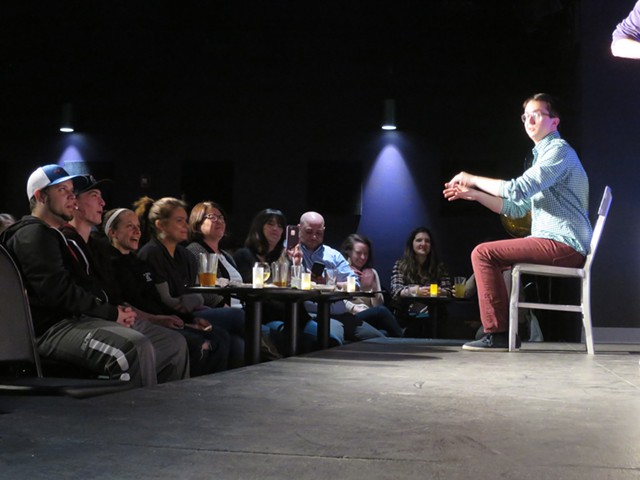 The downtown Burlington venue announced Tuesday that it will reopen on Thursday, September 2, with a three-night run featuring comedian Kyle Kinane performing his "So...Where Were We?" tour. The "Paradise PD" voice actor was the last comedian to headline the VCC before it closed in March 2020 due to the pandemic.

Recently, the VCC has been easing back into live, in-person performance after nearly 16 months of virtual laughs. It currently offers a standup open mic every Tuesday at Four Quarters Brewing in Winooski, as well as a monthly family-friendly improv set, Good Clean Fun!, in Burlington's City Hall Park. The next installment of Good Clean Fun! is Saturday, August 14.

More live shows at the comedy club are expected to be announced by early next week.

The club also unveiled a new Patreon account, through which supporters can become sustaining members. Patrons can choose from six different membership levels — Grin, Giggle, Snicker, Chuckle, Guffaw and ROFLMAO — ranging from $5 to $100 per month. Each level comes with its own set of perks, from exclusive video content to comedy class credits to free tickets to shows.

"We had a lot to think about over the course of 15 months, and we have some great ideas," co-owner Natalie Miller said in a web video announcing the Patreon.

Miller, along with her husband and VCC co-owner, Nathan Hartswick, announced in the video that major physical changes to the club and its aesthetic are on the way. That includes Happy Place, a full-time café to be open during the day. The café's hours and daily schedule will be announced soon.

"We going to revamp our programming [with] a lot of really exciting content from local comedians," Hartswick added in the video. "We absolutely can't wait for you to see it."

Another change the couple stressed in the Patreon announcement is that they will be increasing staff salaries to "a living wage," as well as upping compensation for performers.

"It's almost like we are a business with a conscience!" Hartswick exclaimed.

"We cannot wait to see you in person," said Miller. "We will give you high fives!"