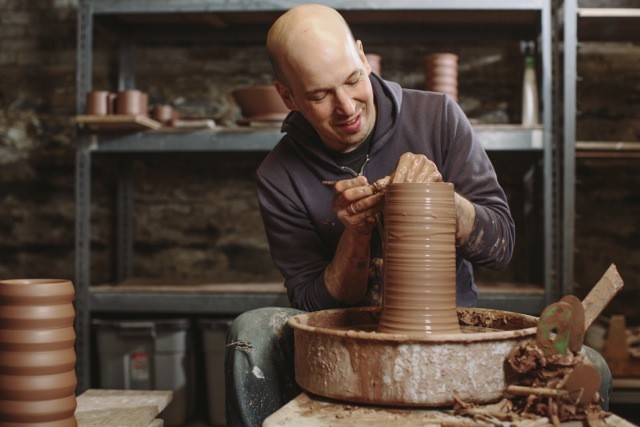 When is imitation not the sincerest form of flattery? When it's actually a rip-off.

Vermont potter Jeremy Ayers recently learned from an observant Instagram follower that a corporate behemoth appeared to have copied one of his designs. Clothing and home goods retailer Anthropologie was offering a mug that looked suspiciously like one Ayers has been making for the past decade.

It's a distinctive design — striped glaze, "accordion" shape. But Anthropologie's version had a crucial difference: "The handle sucks," Ayers wrote on his Facebook page. Indeed, any experienced potter — or frequent holder of mugs — could see that the semi-circular handle of the Anthropologie mug is not hand-friendly.

And, of course, there was another key difference: price. Anthropologie's mug was priced at $14.99, Ayers said. His mugs, thrown one at a time in the artisan's Waterbury studio, sell for $40 apiece. 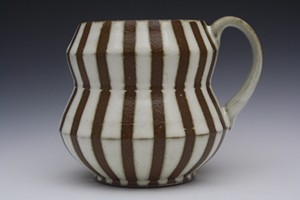 Ayers' initial response was simply to post an Instagram story asking, "Do these pots look familiar to you?" with a picture of the offending mugs in white and yellow or blue stripes. But then, he said, "I got a couple of quick answers from people who are more business-savvy than me."

Also, friends shared the post more than 200 times, tagging Anthropologie. The next day, the mug had disappeared from the company's site.

"You guys are amazing!" Ayers posted to his followers, telling them the result of their "mini-viral" campaign.

Ayers said the corporation has not communicated with him, but he noted the 2018 case of a ceramist in Australia whose design was copied and who fought back. She ended up getting an Anthropologie apology. "I know other companies have done this before, taking good ideas from the marketplace and using it as their own," he said.

Ayers said he intends to "pursue it a little further. I'm going to write [Anthropologie] a letter. I want them to know I'm a real person."

As he put it on his Facebook page:
"I am an artist who spent years in art school and learned art history and have devoted myself to a practice of making pottery for many years. Together with my wife I support a family and home through this work. That is what they do not consider when they steal ideas from artists."

Ayers added in an interview that his business lawyer has been in touch with a patent and copyright attorney. He admitted that he has never copyrighted his design, but has ample evidence to demonstrate that he's been making this particular mug for 10 years.

He never wanted to be a designer, Ayers said — that is, someone who designs a product, sends it to China and has thousands of identical units manufactured.

"I was always a DIY guy," he said, "trying to keep it going in my own way." A husband and father of two boys, Ayers said he works 40 hours a week, Monday through Friday. "I really throw myself into my work," he said, adding that "seven or eight" assistants help him with his business in exchange for use of his equipment on weekends.

"I love to see the lights on [in the studio], people working out there," Ayers said. "I love to share this. When I was in my twenties, I was desperately looking for space to do my work."

Though the pandemic eliminated nearly all craft shows last year, 2020 was Ayers' "best year ever," he reported. "There was a little lull in March and April, but after that my online store was off to the races."

He attributed that to "people being stuck at home and wanting to buy beautiful things for their homes."

Those who can't get enough coffee cups — or like to give them as gifts — can join Ayers' Mug Club. It delivers one mug, each a different design, per month for a three-, six- or 12-month subscription.

So far, it seems, no one has copied that.

UPDATE June 4, 2021: Ayers got a written response from Anthropologie. The company expressed the view that the mug in question is a "currently popular" design carried by other stores as well, but "out of respect for you as an individual designer," it agreed to remove the mug from its inventory.

Ayers said that he is going to proceed with a copyright attorney. Meantime, he wrote to Seven Days, he received the Anthropologie mug, which he had ordered before posting his objection. "Now I'm making my version of their copy of my pottery," he wrote, "to show what the mug should really look like. Very meta!"
Prev
Next