The first flowers appeared by the front door of Three Needs Taproom in Burlington sometime on Sunday night. By Monday morning, several more bouquets had joined those in the entryway of the Pearl Street bar, along with candles, a few cards and at least one bottle of Polar seltzer. As of this writing on Tuesday afternoon, the shrine is overflowing onto the sidewalk with flowers, tokens, candy, chalk drawings and other offerings to the memory of a Burlington legend.

Monique Ford died suddenly over the weekend. The cause has not yet been determined. Her unexpected death sent shockwaves through the Burlington community and beyond. In Queen City circles, social media have largely focused on two topics since Sunday: people registering for or getting the coronavirus vaccine and those sharing memories and grief about "Mo."

Ford, 43, was a fixture in Burlington's nightlife scene for nearly two decades. The Massachusetts native was a warm, welcoming face behind the bar at both the Winooski and South Burlington Higher Ground locations, the O.P. in Burlington and, perhaps most prominently, the Needs. She'd worked there since at least 2005, when the bar was still at its original College Street location. For the past seven or eight years on Pearl Street, Ford was the bar manager.

Friends remembered Ford as a deeply compassionate and caring person with an artistic bent, someone who actively worked to make her corner of the world a better place. One small example: When she lived upstairs from the O.P. on North Winooski Avenue, Ford planted flowers in a derelict planter on the street outside the bar, reclaiming what had basically become a giant ashtray for cigarette smokers.

"She wanted to make it beautiful because that was her spot, " said Margo Rusmisel, Ford's longtime friend and former Higher Ground and Three Needs coworker. "She didn't want to look at a bunch of butts in soil, so she beautified it and it kinda became her planter and her corner."

Ford was a staunch, vocal ally around LGBTQ issues and a longtime supporter of the Chittenden Emergency Food Shelf (now called Feeding Chittenden), for which she frequently organized fundraisers through Three Needs.

"She went out of her way to make everyone feel good," Rusmisel said. "She made an impact on everyone she came across." 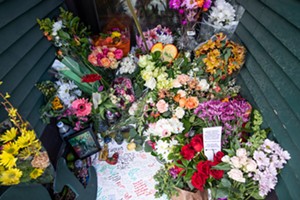 In Burlington, it's only slight hyperbole to say that was just about everyone.

"In Burlington, there are two degrees of Mo," Rusmisel continued, adding that the night she first met Ford, the bartender was dancing on top of the bar during a shift at the old Needs. They became instant friends.

"If you didn't know her, you were probably connected to her by a friend," Rusmisel went on. "She had such a big heart and instantly made you feel like you'd known her your whole life."

A GoFundMe campaign, launched Tuesday afternoon to help Ford's family cover end-of-life expenses, bears out that sentiment. Within hours it had nearly reached its $10,000 goal. Money raised above the goal will be donated in Ford's memory to Feeding Chittenden.

A celebration of Ford's life will likely happen in Burlington sometime this summer. In the meantime, it's a good bet that the collection of treasures for Ford will continue to grow for a while outside the Needs.

As her friend Ben Rutter wrote in a message for the GoFundMe campaign, "She was everyone’s favorite and for so many reasons." Sometimes it was her impeccable music playlist, he noted. Other times it was a special drink. "More often than not," Rutter continued, "she was your favorite because you might as well have been the only person at the bar when you were interacting with her."

Rutter added, "Her presence was and is its very own entity, something inescapable, something ineffable that was readily apparent to all who were lucky enough to be around her."

And that was a lot of now-heartbroken folks in Burlington. We'll miss you, Mo.
Prev
Next