In an order last week, a judge denied a preliminary injunction filed by artist Sam Kerson to stop his mural at Vermont Law School from being covered on the grounds that covering it would violate a federal statute protecting artwork. Kerson, the judge wrote on March 10, “is unlikely to succeed on the merits in this case.”

VLS is free to install acoustic panels on a frame in front of the mural, which the school says will not touch or damage the painting in any way. Kerson, who filed suit in December in U.S. District Court, wanted to halt that construction for the duration of the trial.

His attorneys argued in a hearing on February 24 that it was unknown whether this installation could cause deterioration over time due to lack of air circulation, and further contended that permanently removing the mural from public viewing would violate the Visual Artists Rights Act, 1990 federal law that protects an artist's work from "intentional distortion, mutilation, or other modification.”

Chief Judge Geoffrey Crawford ruled that Kerson’s attorneys hadn’t provided evidence that covering the mural in this manner would harm it, and wrote that it was unlikely that Kerson would prevail in his case, as the protections of VARA “do not prohibit the actions proposed by VLS.”

VLS first announced in July that it would remove Kerson’s controversial mural depicting scenes of enslaved people, slave owners, abolitionists and the Underground Railroad. The two panels, titled "Vermont, the Underground Railroad" and "Vermont and the Fugitive Slave,” were painted by Kerson in 1993 and 1994 in the school's Chase Community Center, with outside funding. According to court filings, debates about it had been happening at the school since at least early 2013, and a student petition in the summer of 2020 inspired the law school's action.

Initially, the mural was going to be painted over. Kerson objected, and removal of the mural was considered, but the work is painted directly on sheetrock and carpenters determined it couldn’t be moved without being damaged.

While the mural is subject to protections under VARA and the statute does prevent its removal, Crawford wrote, concealment does not constitute modification or destruction.

VLS attorneys had previously filed a motion to dismiss the case, which Crawford converted into a motion for summary judgment, which would allow him to make a final determination without a full trial. Should the judge rule against him, Kerson will have the opportunity to appeal to the U.S. Court of Appeals for the Second Circuit.

Through a PR representative, the VLS attorneys declined to comment. Kerson's attorney, Steven Hyman, told the Valley News that he was disappointed in the judge's order and that his team is "exploring how best to continue Sam’s efforts to keep these recognized and acclaimed murals visible." 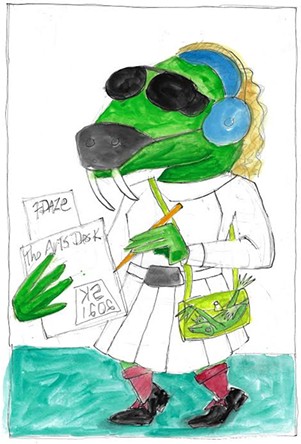 Kerson, who lives in Québec, declined to comment when reached by email, citing dissatisfaction with Seven Days’ previous reporting on the mural case. He attached a caricature of this reporter.