The Bushy Tale of Peanut the Squirrel | Live Culture

The Bushy Tale of Peanut the Squirrel 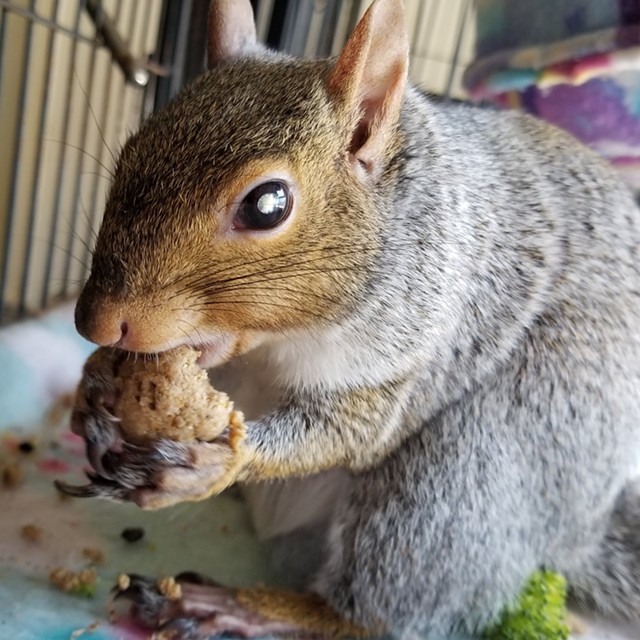 Peanut, a squirrel with the backing of more than 9,000 humans, will live — contrary to the fears a Vermonter expressed in an online petition.

A blind squirrel who resides in a cage in Barre, Peanut will not be removed from her home with a wildlife rehabilitator, and the animal will not be euthanized, according to Col. Jason Batchelder, director of enforcement for the Vermont Fish & Wildlife Department.

Peanut has lived in captivity for all of her seven years, according to Aimee Brown, the Barre woman who's cared for the squirrel since October 2017.  This week, when Brown became concerned that state officials were poised to seize Peanut, she posted a petition to change.org seeking support.  Vermont Fish & Wildlife officials “want to come and confiscate [Peanut] to kill her,” Brown wrote.

By Thursday afternoon, three days after she organized the petition, the movement to save Peanut had more than 9,000 signatures.

Batchelder said that he was aware of the petition but didn’t know that so many people had signed it.

“Our decisions are based on a lot of factors,” Batchelder said. “And right now, the petition is not one of those factors.”

Communicable disease is the primary concern of officials when they make determinations about wildlife and their interactions with humans, Batchelder explained. They’re also concerned about injuries such as scratches and bites. But there are other considerations, too, that have more to do with behavior.

“For the safety of people and wildlife, we have lots of rules,” Batchelder said. “Basically, to keep people from making sure that these animals don’t become pets. Wildlife belongs in the wild.”

Peanut was a pet from day one. She was born in an attic in St. Johnsbury and rescued as a newborn by a girl who lived in the building. The mother squirrel, trying to protect her litter from a threatening landlord, carried her babies to the window and dropped them out, according to Arika Pageau, a tenant in the building who witnessed the event.

Her daughter, Abby Counter, then 9, climbed out the window to rescue a baby  that had landed on the air conditioner rather than the ground.

“She took this little tiny pink thing off the air conditioner and brought it in,” Pageau recalled. It was summer, and Abby devoted her school vacation to caring for and raising the baby squirrel.

“My daughter set her clock on a regular basis to feed Peanut,” Pageau said, becoming emotional at the memory. “She never missed a feeding.”

Peanut lived free in the apartment with the family’s three cats and a dog. She hid peanuts in Abby’s thick ponytail. Peanut was with Abby and her family for close to three years, until one day she bit a friend of Abby's on the chin.

The game wardens were alerted. Though Pageau strongly resisted losing the squirrel, Peanut was relinquished to the authorities.

“It was very hard for us,” Pageau said. “We had raised her from when she was a tiny pink thing with her eyes not open to a full-fledged, happy squirrel.”

Officials placed Peanut, who has impaired vision due to cataracts, with Brown, a licensed wildlife rehabilitator. They asked her if  Peanut could live with her on a long-term basis, in part because of the animal's vision problem, according to Brown.  She said she agreed to that. (Peanut's eyesight has deteriorated with time, Brown noted.)

Usually, rehabilitators release animals to the wild as quickly as possible. "They play a very important role by helping injured and orphaned animals recover so they can be released," Batchelder said.

Brown, whose work as a rehabilitator is voluntary, said she met a game warden on the road between Barre and St. Johnsbury for the squirrel handoff.

“He gave us the squirrel and I took her home,” she said. “I put her in a cage that I keep squirrels in, and she’s been here ever since.”

Peanut's  cage, about 30 by 30 inches, is placed in a 12-by-9-foot room where Brown is “over-wintering” more than half a dozen animals, she said. These include gray and red squirrels, a chipmunk and a woodchuck.

On January 6, a game warden paid an unexpected visit to Brown’s house. She said she was surprised “to see a man with a gun on my porch, pounding on my door, asking to be let in.”

He had come to ask about social media posts in which a woodchuck in her care was pictured wearing a hat, Brown said. She agreed to take the photos down, and explained that the woodchuck was at her home because it has pneumonia. Then the warden asked about Peanut, Brown said. She said she explained the arrangement she had made with the state in 2017, when she originally took in Peanut.

Then, in late February, Brown received a letter signed by Louis Porter, commissioner of Fish & Wildlife. The letter enumerates alleged violations regarding wildlife rehabilitation; it says the state will “revoke your permit to rehabilitate wildlife in Vermont if you fail to come into compliance.”

The alleged violations range from “feeding animals inappropriately” to photographing them and posting images on social media in which they’re dressed “in costume” and posed in “unnatural backgrounds inconsistent with their wild habitats.” (Brown posts about her work on her Facebook page, FourWands Wildlife Rehabilitation.)

The notice from Fish & Wildlife also contends that Brown has “habituated” several animals in her care, undermining "the potential for the wildlife to survive upon release because they have diminished fear of humans."

Brown referred the matter to attorney John Franco of Burlington. In  a March 1 letter to Fish & Wildlife's  legal counsel, he wrote that the notice of violation "is defective because as framed it is a 'Kafka trap.'"

Brown wants to keep her license, especially given the approach of spring and animal-birthing season. She wonders who would take care of the 30 or so baby squirrels that she expects to feed and tend to if her license is revoked.

But her primary concern is Peanut. Releasing her to the wild, Brown said, would be "abusive and inhumane," like placing a blind person who's been nowhere but home in the middle of New York City.

“Right now we want to make sure they won’t kill Peanut,” Brown said. “I will lay down in front of their car before they drive away with her.”

Pageau, whose daughter is now 16, signed the petition to save Peanut.

“I want  people to know Peanut’s real story,” she said. “And how Peanut became Peanut.”
Prev
Next