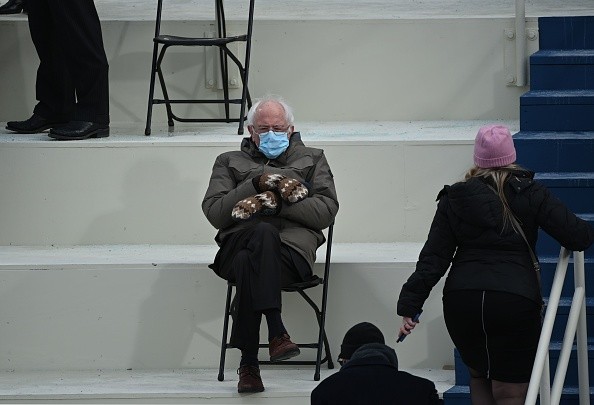 Joe Biden is the president, but Bernie Sanders is an icon.

Their ascensions occurred on January 20 in Washington, D.C., at the inaugural ceremony at which Biden was formally elevated to the U.S. presidency. Sanders, a political independent and Vermont's junior senator, showed up informally — wearing gear that's true to himself and his home state: wool mittens made by an Essex Junction school teacher and a Burton jacket. His mask was blue, and disposable.

A candidate for the Democratic presidential nomination last year,  Sanders sat alone on the steps of the U.S. Capitol, socially distant, legs and arms crossed, and dressed for the weather (downright cold by D.C. standards). It was there that Brendan Smialowski, a photographer for Agence France-Presse, captured the shot seen 'round the world.

Photoshoppers have since manipulated the image to superimpose Sanders everywhere: in famous paintings and top-rated TV shows, rising to the stage in a glittery Rihanna video and sitting still in a black-and-white photograph with the Grateful Dead.

Huddled in his big mittens with his legs crossed, Sanders can be seen aging in a Vermont cheese cave, riding up the single chair at Mad River Glen ski area, and sitting on the concrete steps outside of 242 Main Street in Burlington. He's in a waiting room at the University of Vermont Medical Center, and hanging out with the kitties at the Humane Society of Chittenden County. There's even a website that allows users to input an address to place Bernie there.

The U.S. Senate's most meme-able member had done it again.

Jane O’Meara Sanders called the recreations of her husband's image “really cute.” A number of the versions that people created — and there are infinite imaginings — made her “laugh out loud,” she said on Friday during a phone interview.

Among O'Meara Sanders' favorites were her husband perched on the Iron Throne, hanging out with comic book heroes and with Winston Churchill, Franklin Roosevelt and Joseph Stalin at the Yalta Conference in 1945.

This is the best one I’ve seen so far fwiw pic.twitter.com/kd3fOgyyCb

If you’re going to steal the show, there may be no grander stage than the 2021 inauguration. The occasion marked the moment when “democracy prevailed,” to paraphrase the new president. The chaotic Donald Trump presidency had come to an end.

“I think it was a day of relief,” O'Meara Sanders said. “We have a new president, and I think people want to enjoy the day beyond the pomp and circumstance.”

It probably didn't hurt that it was such a Bernie pose, complete with such authentic Bernie attire. He's even started a new trend: Vermont grandpa-core.

The clothes that wowed the world have both Vermont and family ties. Sanders' Burton jacket was a present from their son, Dave Driscoll, a couple of years ago. The jacket is from Burton’s Best Ever collection and was a piece that Driscoll worked on with family friend Jake Burton Carpenter, the late founder of Burton Snowboards, O'Meara Sanders explained.

Her husband admired the jacket — its lightweight feel and look — but the original version had a picture of himself on the back. He didn't want to wear a jacket with his own image on it, O'Meara Sanders said. So the present Driscoll gave Sanders was the Burton jacket, minus his picture. The wool-and-fleece mittens — made from repurposed sweaters — were crafted by Jen Ellis, a teacher whose child attended the preschool run by Driscoll's wife, Liza Driscoll.

Related Those Mittens Bernie Sanders Wears Campaigning Are Made in Vermont

Those Mittens Bernie Sanders Wears Campaigning Are Made in Vermont
By Sasha Goldstein
True 802
The day after the inaugural, the image and surrounding hoopla had already spawned a new line of clothing. The Sanders campaign created a Chairman Sanders crewneck sweatshirt emblazoned with the bundled-up Bernie. "Vermont jacket, Vermont gloves, Vermont common sense," the description of the union-made, cotton sweatshirt says.

It sold out in an hour on Thursday evening, O'Meara Sanders said.

It was a back online Friday afternoon with a disclaimer: "Due to overwhelming demand for this item, it will be 3-6 weeks until you receive your sweatshirt."

All of the proceeds from sales of the $45 sweatshirt benefit Meals on Wheels in Vermont.

“What’s nice is that it’s being used to help people,” O'Meara Sanders said. “Which our supporters absolutely loved.” Correction, January 23, 2021:  An earlier version of this story misidentified the person who worked on the jacket with Jake Burton Carpenter.
Prev
Next