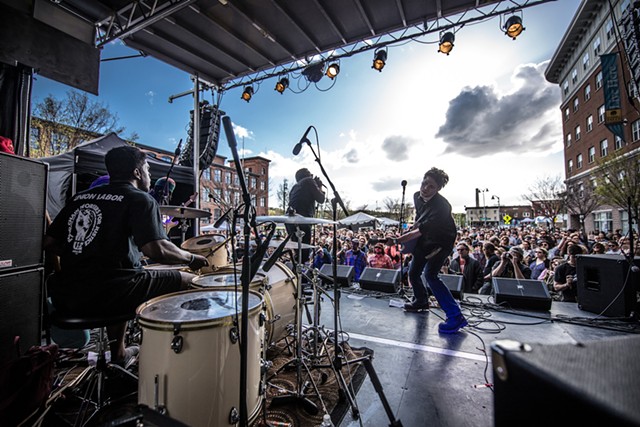 Rough Francis have fired bassist Dan Davine for allegedly attending what the band called "the terrorist insurrection" in Washington, D.C., on January 6, at which supporters of President Donald Trump rioted and stormed the U.S. Capitol building. The Burlington punk band announced the decision in a post on Instagram.

"Rough Francis is first and foremost a Black punk band," the post begins, "so when we heard that our bass player, Dan Davine, held views rooted in white supremacy and had attended the terrorist insurrection at the Capital [sic], we took swift and decisive action to immediately remove him from the band."

Rough Francis were formed in 2008 by brothers Bobby Jr., Urian and Julian Hackney, as well as guitarist Dylan Giambatista and bassist Steve Williams. It was a tribute to the Detroit-based proto-punk band Death, founded in the 1970s by their father, Bobby Hackney Sr., and his brothers Dannis and the late David Hackney.

Death experienced a rebirth in 2009 following the Drag City release of an album of 1970s demos called … For the Whole World to See. The band was celebrated by fans and national media as something of a missing link in the evolution of punk music. The New York Times called them "punk before punk was punk."

Related The Breakout: Reunited and revitalized, Death keep on knocking

The Breakout
Reunited and revitalized, Death keep on knocking
By Dan Bolles
Music Feature
Rough Francis would go on to begin writing and releasing their own music inspired in both punk sound and political tone by Death. They've since become an acclaimed nationally touring band in their own right whose music fervently advocates for social and racial justice.

Their most recent record, Urgent Care, was released in 2020. It is the only Rough Francis album to include Davine on bass and was primarily recorded at his home studio.

Related Rough Francis' Message Is More Important Than Ever

Rough Francis' Message Is More Important Than Ever
By Jordan Adams
Music Feature
According to the band's Instagram post, Rough Francis will now operate as a trio composed solely of the Hackney brothers. Any additional musicians with whom the band collaborates in the future will be guests.

Rough Francis singer Bobby Hackney Jr. declined to to comment on the decision to fire Davine and relayed that the band did not wish to speak to the press on the matter.

Attempts to reach Davine were not immediately successful.
Prev
Next