At Bennington Museum, Artworks That Envision the Future Could Be Yours | Live Culture

At Bennington Museum, Artworks That Envision the Future Could Be Yours

Looking for an out-of-the-ordinary holiday exhibition, or gift? The Bennington Museum’s current show, “Vermont Utopias: Imagining the Future,” features visual artworks by 25 artists that are available for purchase through an online auction.

The auction is closed-bid, meaning bids are submitted without knowledge of other bids, so you won’t know if you’ve won the piece until bidding closes on December 21. The fundraiser will split proceeds evenly between the artists and the museum.

The museum is open for in-person viewing Fridays through Mondays, 10 a.m. to 4. p.m. But for those who can't get there, or prefer to avoid human contact altogether, simply browsing the exhibition online is a pleasure. 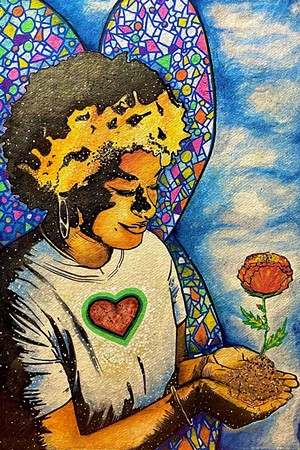 Curator Jamie Franklin and director of advancement Alexina Jones created a virtual gallery that's packed with information. Clicking on each work reveals an informative artist bio, an artist’s statement about the work, audio clips of the artist describing his or her creative process, and more. It’s like having the artists at your shoulder while you examine their work.

Full disclosure: Not every work in “Vermont Utopias” is hopeful. Franklin asked the invited artists to respond to the prompt, “What is your vision for the future of Vermont?” (Most are Vermont artists; some live elsewhere but grew up here.) He chose the utopian theme a year ago to fit the then-technology-themed statewide exhibition initiative by the Vermont Curators Group, now called “2020 Vision: Reflecting on a World-Changing Year.”

When the pandemic hit, says Franklin, artists had more time to “think about the future in relationship to the present” — including its ills. “You can’t have utopia without thinking about dystopia,” he adds.

Realist Kathleen Kolb’s devastatingly beautiful painting “Beginning of February,” a 12-by-16-inch oil on linen, explores a future dystopian Vermont that is already visible in the present: one in which winter has little snow or ice. A master of light, the Lincoln-based painter uses daylight’s demise in a scene of fields, hill and river to evoke the eerie reality of climate change.

“When I think about our collective future, I am both hopeful and concerned,” Kolb writes in her (under)statement.

But this Kelis wears a heart-print T-shirt instead of her usual armor, Condry writes, “because in a Vermont utopia she doesn’t have to wear protection against racism and oppression.” Let it be so.

Other hopeful visions of Vermont’s future utopia include Troy, N.Y.-based Michael Oatman’s collage “Design for Leaving (No. 2),” in which the state of Vermont is seen rocketing out of a vintage map directly toward the viewer — an appealing idea given the last four years.

“Welcome to Buckyville,” by collagist/graphic designer W. David Powell of Underhill, takes a slice of Vermont’s past to reference the future: sustainability-minded inventor Buckminster Fuller’s Dymaxion House. A prototype was built on the Bennington College campus in 1942, but the houses never went into production. Powell designs a village of them.

“We Who Believe in Freedom,” a 24-by-26-inch acrylic painting on birch panel, is a study that Lopi LaRoe did for her Rutland mural of the same name, completed in July. The study depicts a young Black girl with a direct gaze, an open, textured face and shimmering Afro. She looks as if she’s about to speak. A sunflower in the foreground sheds petals inscribed with words of hope — “respect,” “love” and “cherish” among them.

The Rutland-based white street artist, who signs her work LMNOPI, has specified that the work’s proceeds will be split three ways among artist, museum and the Clemmons Family Farm in Charlotte, which supports Black artists and their work.

Bidders in the art auction are encouraged to aim high, as they can bid only once per work. All are invited to join the museum’s “Vermont Utopias: Trivia Night” virtual benefit on Saturday, December 12, at 7 p.m.; teams will answer questions about history, art and the region to win a wine tasting for 12 at couch + cork in Bennington.

“Vermont Utopias: Imagining the Future,” is on view through December 28 at Bennington Museum. Online auction bidding closes December 21.
Prev
Next