If you haven’t voted, this video’s for you. If you have, it’s still for you. “The Activation” combines dance, music, interviews and information to help viewers turn confusion into clarity, inertia into action.

Part music video and part rally for change, the five-minute work captures 22 Vermonters moving and dancing together on the Statehouse lawn and steps in Montpelier. In brief testimonials, they share their experiences and hopes for this election and beyond. In closing, the video invites viewers to consider supporting seven social justice organizations and then asks, “How will YOU activate?” 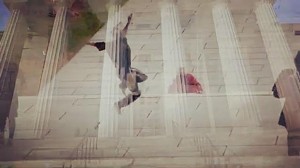 The team aimed “to create a movement expression to instill in the participants and in the viewers this rise-up energy to create personal and collective change,” movement director Satterlee said by phone.

With a hip-hop song in the background, the video begins with artistically rendered footage of the Black Lives Matter mural on State Street and the words, “Vote” and “Make Change.” Wearing masks and distancing safely, people of various gender identities, from teenagers to septuagenarians, move to a soundtrack Heckler created. They roll, reach, gyrate, run, collapse and bounce back up to express emotions and convert energy into action.

“The structure of the movement score was all about getting the internal motivation to stand up when you’re heavy, to face together the hardships that can sometimes make us numb or feel stuck and to push forward,” Satterlee said.
“I’ve felt helpless and frozen sometimes,” dancer Elise Simone recounts in the video, “and my emotional response to news is to … experience the progression of that, that frozenness or heaviness … the heaviness of the pain.” The process of getting up off the ground with others in the video made her “feel electric.”

The original call to participants stated, “Our superpowers live in our abilities to be advocates and activists.”

Dancer Polly Motley echoes that sentiment in the video. “I think it’s important for artists to be active for social justice,” she says. “And we’re not going to have social justice if people don’t vote.”

Equity is a key election issue for dancer Sarah Brutzman, who said, “I feel like this is a crucial time for women to really think about our rights. Our rights need to be expanded, not diminished, and I’m really hoping we can come out in force.”

In her conversation with Seven Days, Satterlee noted that participants are proud of the video and are sharing it widely. “The best outcome would be that it encourages even one person to vote,” she said.
Prev
Next