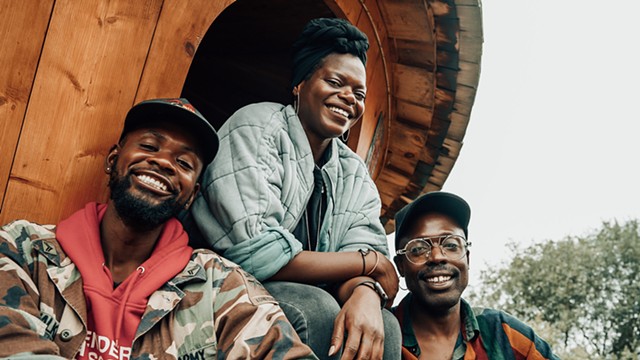 When the spread of COVID-19 shut down all performing arts venues in March, JAG Productions had to halt its off-Broadway staging of Esai's Table. The play by Nathan Yungerberg previously had a month-long run in White River Junction, where JAG Productions was established in 2016. It was the first time Vermont's only Black theater company was copresenting a work in New York City, and the premature close was a disappointment.

But founder and producing artistic director Jarvis Antonio Green got much happier news a few months later when he learned that the Bay & Paul Foundations was granting $100,000 to JAG Productions. The New York-based nonprofit's heady mission is "to foster and accelerate initiatives that prepare agents of change working to strengthen  our social compact and develop authentic solutions to the challenges of this pivotal century."

Green received word of the grant in July but only released the information publicly this week. "I don't know why," he told Seven Days in a phone call. "Mostly just getting some things in place, getting a PR person to write the release … I wanted to have a system for how we get our news out."

That release explains that the foundation gave JAG Productions the unrestricted grant based upon the company's "proven record of developing deep connections through its art in the Upper Valley community and for the promising projects it has on the horizon."

One of those forthcoming projects is currently in development — during a retreat at the Refuge at Knoll Farm in Fayston.

"So much of our work has been focused on responding to racism and white supremacy," Green said. He added, in a second release about the project, "Is racism what's distracting us from being our fullest creative selves? What does it mean to create a theatrical piece where we're not distracted by racism?"

The group — producers Green, Stevie Walker-Webb and Marie Cisco; 11 actors; a couple of documentarians; and a chef — embarked on a month-long retreat to "explore the question, 'Can a play be created outside the power structures and without reference to whiteness, in a pure expression of Black Joy?'"

In a sense, the process itself will become the play, Green noted. The Black Joy Project group is creating a methodology for developing work "using games, workshops, conversations," he said. "We're calling on our ancestors and folks who have done this work before us. It's a spiritual practice, really.

"This will be a tool to use to create Black theater in the future," Green added.

Meantime, businesses and other entities in the Upper Valley are showing support not just for JAG Productions in particular but the movement for racial justice in general.

"We had a meeting a couple of weeks ago with people who wanted to adopt practices, in their business and in Vermont, regarding Black and  Brown people," Green said. "Some of them created their own fundraisers to support JAG. Some are creating anti-racist policies. [Others] are trying to amplify the voices of Black and Brown and LGBTQ voices."

And so the "Ambassador Program" was launched. "It's for people wanting to do this work on their own," Green said. "They're coming back and saying, 'We don't want this to be a one-time thing; we want to dig deep.'"
Prev
Next