Colorful Afronaut Mural in Need of a Wall | Live Culture

Colorful Afronaut Mural in Need of a Wall

South End businesspeople are fundraising for and seeking a wall for a mural by Vermont artists. The proposed artwork, a large, colorful painting in an Afrofuturist style by Will Kasso Condry and Jennifer Herrera Condry, would include contributions by local kids.

The mural would depict “an afronaut, a Black warrior who travels through space and time fighting for justice for all Black, Indigenous and Brown folks,” according to the artists’ statement. The afronaut is modeled on the Condrys’ daughter. The painting is meant to be joyous, and includes a quote by Albert Camus: "The only way to deal with an unfree world is to become so absolutely free that your very existence is an act of rebellion."

Kasso Condry and Herrera Condry live in Brandon and make public art under the business name Juniper Creative Arts. They've painted murals at Middlebury College, Princeton University and Ben & Jerry's on Church Street in Burlington, and always involve community members in the process. Kasso Condry is Black, and Herrera Condry is Afro-Caribbean. They said it’s important for people of color in Burlington to see themselves represented in public art.

“It isn’t a secret that our work is deeply embedded in our identities, our style, our activism,” Herrera Condry said.  "So, naturally, that was going to come through in the artwork, and we believe as artists that we have a role to play in revolution, in affecting change in the world.”

“People tend to think that just because I’m a Black artist, everything I do is going to be angry. I’ve been dealing with this for years,” he said. Instead, “there is a narrative here that we’re creating, which is based in the world we want to see.” That world is fun, colorful and explores elements of science fiction. 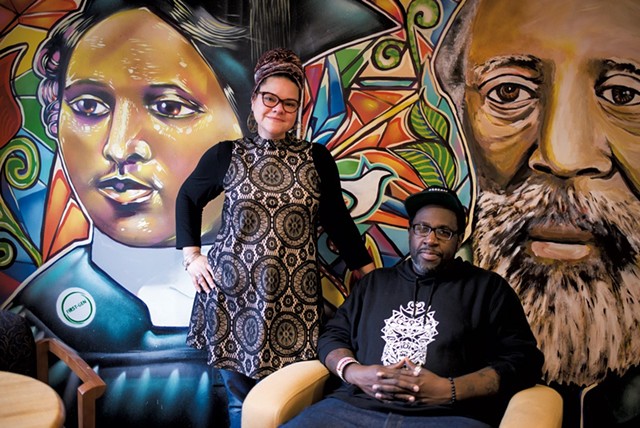 The mural was initially commissioned by tenants of the Soda Plant on Pine Street, including Grace Meyer, the general manager of CO Cellars, and Patricia Trafton, the owner of Soapbox Arts. They planned to install it on a wall bordering the Soda Plant parking lot, visible to drivers on Pine Street. Last year, during the South End Art Hop, the Soda Plant tenants commissioned Will Gebhard to paint an abstract mural on the wall, which is still there. Meyer and Trafton said they intended to put a new mural there every year.

But the wall doesn’t belong to the Soda Plant or its owner, Steve Conant. It’s the backside of Kerry’s Kwik Stop, a convenience store on Saint Paul Street owned by Carrie Rockwood. When sent a mock-up of the mural, Rockwood said no. “I do not like the photo or the phrase. I would like something representative of our community/Burlington,” she wrote in an email to Conant.

Rockwood told Seven Days that she didn’t actually mean to respond to the art itself, or its depiction of a Black woman. She said she’s had previous disputes about the wall with Conant, and that she had wanted the mural to match the painting on the north side of her building.

“Really it doesn’t matter what it is, it’s the fact that it was supposed to be my front mural continuing on,” Rockwood said. “I feel very strongly about the Black Lives Matter coalition, and I’m very much involved in it.”

Conant said he had no knowledge of any previous disagreements over the mural and that Rockwood had never discussed her vision for the wall with him.

After Rockwood’s email rejecting the mural, Meyer and Trafton said they quickly drafted a new plan. Good mural walls, without windows and visible from the street, are few and far between in Burlington, so they had to start looking right away. They’re also crowdfunding for contributions to help pay the artists and donate to the King Street Center.

“There’s a difference between painting [the words] Black Lives Matter, and paying Black artists to paint a Black person, and paint their own story and their own representation,” Trafton said.

The artists said they were unsurprised by the change of plans, and that they’ve had building owners reject their work before.

She said it’s important to note that the mural isn’t a memorial for a Black or brown person who’s been killed. It’s a celebration of life, joy and nature. “We’re living and breathing,” she said.

“Black joy is not going to be the downfall of society, it’s going to be what rebuilds it,” Kasso Condry said.

Meyer and Trafton said they hope to find a wall and funding soon enough to have the mural completed by the middle of September.
Prev
Next