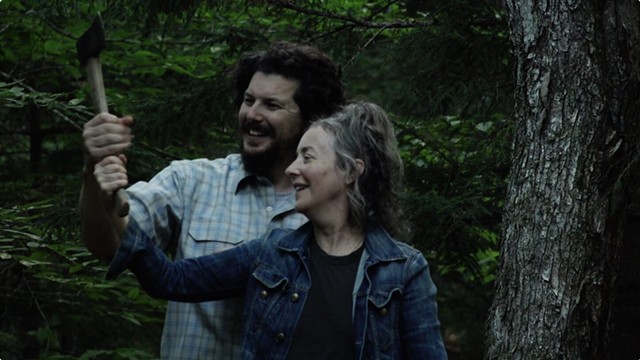 The film
Build the Wall

The deal
No, this movie is not a pro-Trump statement (though you will find plenty of impassioned defenses of the border wall if you simply plug the title into a search engine). It’s a low-budget, low-key drama that was shot by prominent indie film figures in Hardwick, Vt.

The wall in question is the traditional stone wall that Kev (Kevin Bewersdorf) has promised to build his friend Kent (Kent Osborne) as a 50th-birthday present. They were both drinking at the time, and when Kev shows up with a haul of stones, Kent is dismayed. The wall building conflicts with his plan to host a friend from LA, Sarah (Jane Adams), in whom he’s romantically interested. Kev, who currently lives in his truck, vows to bathe in the brook, “shit in the woods” and stay out of the pair’s way.

Naturally, that’s not what happens.

Will you like it?
The best way to find this movie with minimal search-engine confusion is to google the title with “Joe Swanberg.” Known for his low-budget “mumblecore” work, which helped launch stars such as Greta Gerwig, the Chicago-based director went on to make slightly more mainstream slice-of-life movies such as Drinking Buddies, along with the Netflix anthology series “Easy.” Build the Wall, which was shot in six days in 2019 at the Vermont home of Osborne — Swanberg’s friend and frequent collaborator — is his back-to-basics movie.

In an interview with NoBudge, the curated platform hosting the film, Swanberg describes a motive for making it that was, perhaps, prescient:


I was extremely fearful to sink a ton of money into a film because it felt that the country was on very shaky ground and something bad was going to happen. … I wanted to see what it was like to make something super tiny again — in the event that I wouldn’t have other options.

There’s no better place to go back to basics than rural Vermont. While the setting of Build the Wall may seem idyllic or exotic to some viewers, local ones will nod in recognition at the scenes of wall building, farmers market shopping, brook skinny-dipping and, of course, cannabis cultivation.

It’s easy to imagine how another big-city filmmaker might have turned this story into a broad culture-clash comedy in the “Schitt’s Creek” vein, pitting the homespun Kev against the transplanted urbanites Kent and Sarah. But that would be the polar opposite of Swanberg’s style, which redefines “subtle.”

Comedy is built into the largely improvised script, but there are no gags. Kent and Sarah’s relationship is believably awkward, incorporating (parental advisory!) full-frontal nudity that occurs in some extremely unerotic situations. There’s something deliciously middle-aged about the way these two interact — set in their ways, protective of their habits, yet tentatively yearning for something more.

These scenes are interspersed with Kev explaining his wall-building technique to the camera. While his monologues can get amusingly self-serious, they don’t read as parody. Kev could be a native Vermonter, or he could be a newcomer who prides himself on his acclimation (unlike Kent, who still struggles to toss his ax well enough to impress Sarah). Either way, Kev ends up making a damn nice wall, and nobody is the butt of the joke. Build the Wall is indeed a “super tiny” movie — it runs just more than an hour, and not a lot happens by usual movie standards — but it’s a refreshing, good-hearted one.