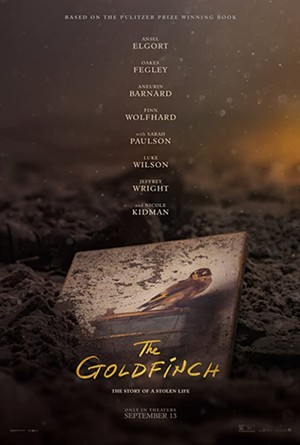 The film:
The Goldfinch

Where to see it:
Amazon Prime Video; rentable on various platforms

The deal:
In this adaptation of Donna Tartt’s Pulitzer Prize-winning novel, a terrorist bombing at the Metropolitan Museum of Art changes everything for 13-year-old Theo Decker (Oakes Fegley). His mother is killed in the blast, setting him adrift to find a home first with the cultured matriarch (Nicole Kidman) of a Park Avenue family, then with his deadbeat dad (Luke Wilson) amid the foreclosed homes of Las Vegas, then with a sympathetic antiques dealer (Jeffrey Wright).

All the while, Theo keeps a secret: During the chaos following the bombing, he made off with a priceless 17th-century painting, Carel Fabritius’ “The Goldfinch.” That theft haunts him into his twenties. Hiding a broken psyche and a drug addiction beneath a façade of success, the older Theo (Ansel Elgort) must find a way to reconcile with his past.

Will you like it?
Before its September 2019 release, The Goldfinch was expected to be an awards contender, given its beloved source material, director John Crowley (Brooklyn) at the helm, and Oscar winner Roger Deakins behind the camera. Then the reviews came in. A critical and financial flop, this failed Oscar-bait is now free for your delectation on Amazon Prime.

So, how bad is it? Not having read the novel, I tried to give the movie a chance on its own terms, but I had trouble stomaching the too-cute precocity of young Theo in his ties and sweater vests. The film’s vision of affluent New York seems to date from the 1930s, with tweens making arch statements such as “They’ve grown quite fond of you.” This refinement is contrasted almost cartoonishly with the modernity of Vegas, where Theo’s dad and his girlfriend embody the ultimate sin (in this story, anyway) of being tacky, money-grubbing slobs.

The core problem is that Theo is remote and passive throughout, more conceit than character. The movie becomes way more fun whenever his ne’er-do-well friend Boris is on-screen, even though (or perhaps because?) Finn Wolfhard plays him as a teen with a ludicrous “Ukrainian” accent. And it’s Boris who catalyzes much of the action.

As the two kids wander around a desert development together, swimming and tripping on pills, Deakins’ cinematography briefly turns the movie into a Sofia Coppola-type mood piece. But then the Dickensian plot kicks in again, full of connections and contrivances and monologues about art and life and mortality and timelessness, and all that is as annoying as it sounds. I came away with the moral that to be a good person, you need the soul of an artist, but if you want to get anything done, it’s probably better to be a scrappy Ukrainian with a thirst for “wodka” and a skill for gunplay.