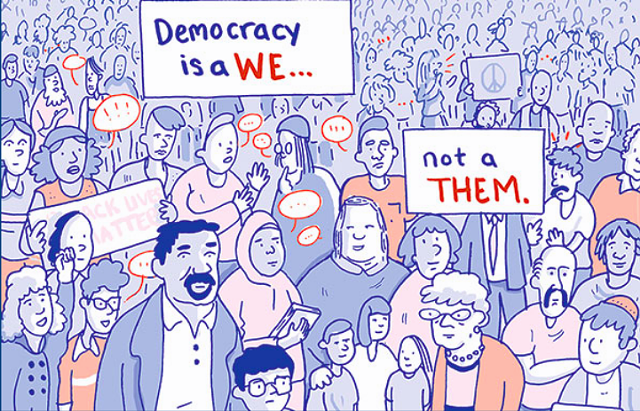 This year’s Vermont Humanities fall conference — an annual series of public lectures normally held at the University of Vermont each November — will take place, you guessed it, online. The program, titled "Democracy 20/20," will consist of 15 free virtual talks and workshops, streamed weekly between August 19 and November 13 on the theme of civic engagement.

Beginning in October, the lineup may also include small in-person events as public health guidance allows.

Each webinar will focus on a different aspect of democratic theory and practice. The first, “Women’s Suffrage: Moral Advancement or Politics as Usual?” will examine the history of the women’s suffrage movement in the United States from the perspectives of Elizabeth Cady Stanton and Frederick Douglass.

Other presentations include a panel of Abenaki leaders; a lecture by Amherst College professor Catherine Sanderson on the psychology of inaction and the bystander effect; and a conversation between longtime journalist Yvonne Daley and Pulitzer Prize-winning columnist David Moats, her former colleague from the Rutland Herald, on the importance of research and depth in journalism.


With the 2020 presidential election just around the corner, Vermont Humanities executive director Christopher Kaufman Ilstrup hopes that webinar-goers will come away with a deeper appreciation for their hard-won right to cast a ballot.

"Tens of thousands of Americans, and indeed people all over the world, have fought and in some cases died for our right to vote," said Kaufman Ilstrup. "We need to honor that sacrifice by continuing to participate today.

"As our friend Rep. John Lewis said in the essay printed in the New York Times on the day of his funeral," he continued, "'Democracy is not a state. It is an act, and each generation must do its part to help build what we called the Beloved Community, a nation and world society at peace with itself.'"