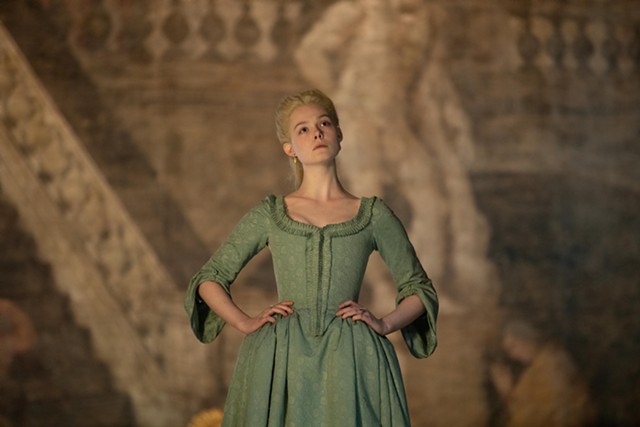 Where to see it:
Hulu

The deal:
In 18th-century Russia, a teenage princess arrives at the imperial court for an arranged marriage to the young emperor. Theirs is not a match made in heaven. While the bride, Catherine (Elle Fanning), is a dreamy bookworm who worships the thinkers of the French Enlightenment, the groom, Peter III (Nicholas Hoult), is a spoiled man-child who enjoys boozing, killing things, recreational sex and more boozing.

The powers behind the throne, Peter’s eccentric Aunt Elizabeth (Belinda Bromilow) and the court’s resident archbishop (Adam Godley), are seasoned political players who do their best to steer Peter by indulging his narcissistic whims. For her part, Catherine connects with the court’s intellectuals and malcontents, and together they hatch a palace coup. Their plans are complicated by an ongoing war with Sweden and Peter’s clumsy efforts to make Catherine warm to him — by, among other things, gifting her with a lover (Sebastian De Souza). 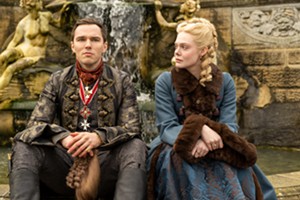 “The Great” is for viewers who don’t mind some alternative history in the name of contemporary relevance — and fun. The words “an occasionally true story” appear on each episode’s title card, and the emphasis should be on “occasionally.”

Series creator Tony McNamara wrote the Oscar-nominated screenplay for The Favourite, which also plays fast and loose with historical facts. Indeed, “The Great” and The Favourite are so similar in their arch, absurdist tone that if you like (or hate) one, you’re likely to feel the exact same way about the other.

Streaming services have no shortage of sumptuous-looking series about royal intrigue, but “The Great” stands out for its dark humor, shock value and sheer misanthropy. This is the “Deadwood” of queens-in-pretty-dresses dramas: When nobles toast to Peter III, they shout, “Huzzah!” and smash their glasses on the floor.

The palace serfs, who presumably have to clean up all that broken glass, are treated like subhumans; during an outbreak of smallpox, the nobles blithely burn their infected servants alive. Pleading for vaccination, Catherine is the viewer’s surrogate and the voice of modernity and reason, yet she’s also painfully naïve — a sheltered kid trying to rebuild a country.

Fanning and Hoult both give wonderfully timed comedic performances, as do the supporting players. “The Great” is lovely to look at and consistently witty and entertaining. Yet I found myself dawdling over finishing this (long) first season, because it’s hard not to be bummed out by the unplanned resonance of the tale of a vain, insecure, bullying leader with … current events. Perhaps the second season, in which Catherine starts earning her famous epithet, will offer more hope.