Where to see it:
Hulu; rentable on various services; and at VTIFF Virtual Cinema.

At Stanley’s urging, pregnant Rose takes over the domestic tasks of the household for Shirley, who is depressive, borderline-agoraphobic and struggling with her next novel. Meanwhile, Stanley enjoys his pick of a “harem” of adoring female students. Shirley knows he’s unfaithful, and wicked barbs fly between the pair.

At first, Rose is repelled by Shirley’s sharp tongue, but she soon becomes fascinated with the older woman’s fertile imagination and general witchy aura. Together, the two investigate the real-life disappearance of Bennington student Paula Jean Welden on the Long Trail, which inspired Jackson’s novel Hangsaman (1951). Will Rose grow from this partnership, or will she end up becoming another lost girl?

Will you like it?
First things first: No, Shirley wasn’t shot in Vermont (Vassar College stood in for Bennington), and no, it doesn’t hew closely to the biography of one of Vermont’s most famous writers. Loosely adapted from Susan Scarf Merrell’s novel of the same name, the screenplay by Sarah Gubbins revises the timeline of Jackson’s life and makes her childless — quite a change, considering that the real Jackson wrote prolifically about raising her four kids when she wasn’t crafting her brainy gothic tales. This isn’t a biopic so much as fan fiction. 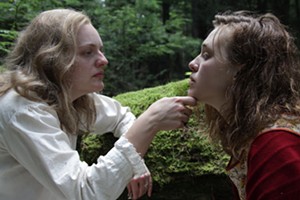 Steamy fan fiction, too, with an indie-movie gloss. The opening scene finds Rose reading “The Lottery” on the train to Bennington. The scenario of small-town stoning apparently gets her so hot and bothered that she grabs her husband, and soon they’re getting busy just out of sight of their fellow passengers.

Director Josephine Decker (Madeline’s Madeline) gives the whole movie a dreamy, quasi-mystical eroticism that is easy on the eye but harder for the brain to process. With no backstory or discernible personality, Rose feels like an empty vessel; frankly, it’s not always clear why Shirley gives her the time of day.

Yet Moss’ star turn manages to redeem the film, for all its frustratingly mannered aspects. Alternately socially awkward, snarling and seductive, with a sly wit she deploys like a razor blade, this Shirley is utterly believable. Moss and Stuhlbarg have a compelling marital rapport, too: While Stanley plays the jovial host, Shirley’s creativity is fiercely private. When these two spar, Shirley throws off sparks.

Decker seems to be trying to craft an atmospheric fable about feminist mentorship with a dash of sapphic desire — a good enough idea, but sabotaged by the blandness of its nominal heroine. I found myself wishing the pretty young houseguests would leave already and allow me to spy on the deep dysfunction of the older pair in peace.