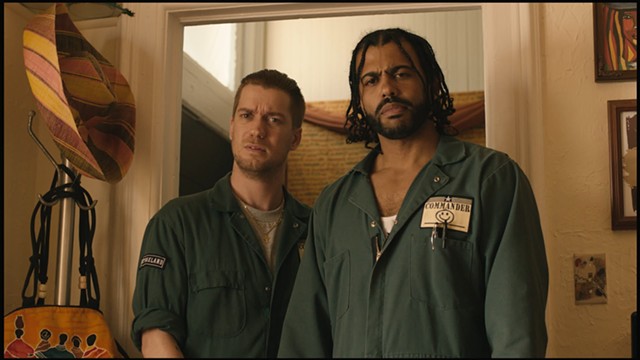 Where to see it:
HBO Max, HBO Go; rentable on other services.

The deal:
In this explosive indie film from first-time feature director Carlos López Estrada, Daveed Diggs (Tony Award winner for Hamilton) and Rafael Casal play Collin and Miles, best friends who grew up together in Oakland, Calif. They work for a moving company, reluctantly facilitating the influx of affluent hipsters who are reshaping their beloved city. Together they banter, talk shit and freestyle about their frustrations.

But sometimes their concerns diverge. Collin is black; Miles is white. Collin is a convicted felon who is determined to stay out of trouble for the last three days of his year of probation. Miles is a fast-talking hothead who sometimes carries a gun.

Alone at night, Collin sees a cop shoot down a fleeing African American man. Aware that stepping forward as a witness would threaten his own freedom, he says nothing. But the violence haunts him, and over the course of those crucial three days, growing tensions draw him and Miles toward a reckoning.

Will you like it?
Big, bold and stylistically striking, with hot neon accents and occasional hyperreal touches, Blindspotting brings the energy of Spike Lee’s Do the Right Thing to today’s indie scene. While it’s not an ensemble piece, it’s strongly rooted in love for an ethnically diverse city, and it mixes comedy and tragedy with aplomb.

If you watch Blindspotting expecting something heavy, you may be surprised to find yourself laughing at Miles and Collin’s clowning around and their pointed mockery of hipsters and tech bros. If you watch it expecting something light, the recurring motifs of violence and institutional racism will soon set you straight. Some scenes are funny until they take a dark turn, making us contemplate the thin line between the absurd and the awful. Others grapple so directly with painful subjects that they’re tough — but rewarding — to watch.

Written by Casal and Diggs, who are themselves lifetime friends, the screenplay could sometimes be accused of melodrama. But the characters feel real and lived in, like the setting; it’s not surprising that Starz has announced plans for a spinoff series.

Blindspotting is not a movie about injustices that are safely in the past, or wrongs that are righted before the credits roll. It’s an absorbing, powerful film about the joys and limits of interracial friendship in a contemporary setting where racism is still very much a given.