Couch Cinema: 'The Half of It' | Live Culture

Couch Cinema: 'The Half of It'

Where to see it:
Netflix

The deal:
Edmond Rostand’s Cyrano de Bergerac offers an irresistible template for romantic comedies. What if the wordsmith who’s been hired to help a tongue-tied oaf win the girl of his dreams … is also in love with her?

An award winner at the Tribeca Film Festival, this fresh-faced update from writer-director Alice Wu is set in rural Washington. Ellie Chu (Leah Lewis) is a bright, lonely teen who helps support her widowed dad (Collin Chou) by selling term papers to the popular kids. When football player Paul Munsky (Daniel Diemer) asks her to write a letter to Aster Flores (Alexxis Lemire), who’s dating one of his teammates, Ellie initially refuses because she has a crush on Aster herself. 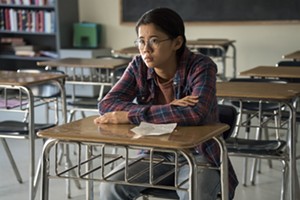 But, with her household in dire financial straits, Ellie swallows her pride. Knowing that she and Aster share a love for books and ideas, Ellie woos her for Paul using letters, chats and, in one memorable sequence, a bare wall ripe for artwork.

By the time Aster and Paul have their first date, she thinks he’s a budding existentialist in shoulder pads. Sweet as he is, Paul isn’t qualified to discuss much besides his prized culinary creation: sausage tacos.

As Ellie and Paul evolve from business partners into friends, Paul expands his horizons. Complications, both comic and bittersweet, ensue.
Will you like it?
Full disclosure (and a spoiler): I learned about The Half of It from a disgruntled Twitter thread. Some viewers are unhappy with how the movie ends. Named for Plato’s theory that we’re all searching for our other halves, Wu’s film plays with the notion of soul mates, but her clever screenplay remains a tad skeptical. (For what it’s worth, the original Cyrano doesn’t end up happy with his beloved Roxane, either.)

Much more than a romance, The Half of It is a touching, funny film about a brainy Chinese American lesbian coming into her own in a town where football players are revered like rock stars. While the courtship takes center stage, Ellie’s supportive relationships with Paul and her dad are drawn in loving detail. The factors that give Ellie her outsider status are likewise depicted with a careful hand.

A climactic set piece in a church feels a little broad, given all these nuances. Overall, though, Wu has pulled off a smart, welcome update of the tropes that folks of a certain age remember from John Hughes movies. The yearning oldies on the soundtrack are the cherry on top.