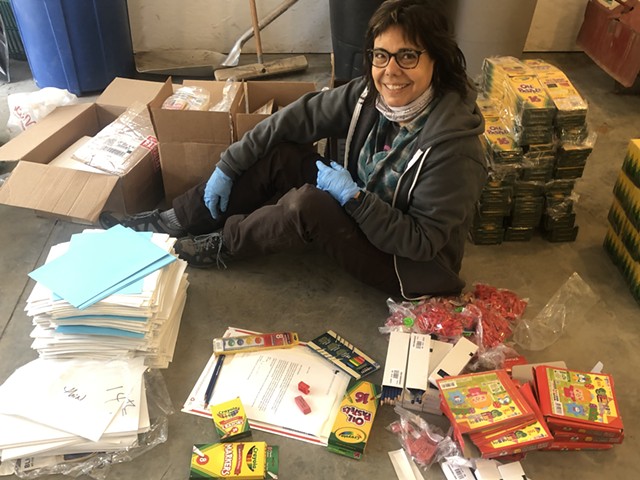 When Governor Phil Scott announced on Sunday, March 15, that all schools in Vermont had to close by the following Wednesday, the news sent teachers across the state scrambling to prepare their students — and themselves — for an abrupt switch to virtual learning.

"We were staying calm on the outside, which was important," said Arista Alanis. She's the Vermont Studio Center's community arts coordinator and an art teacher at Johnson Elementary School. VSC has funded the school's art program for decades, and Alanis — whom the students call "Ms. Arista"— has been teaching since 2003.

Alanis gathered her students' sketchbooks from the art classroom and distributed them to take home. She started planning online drawing lessons and sending them to homeroom teachers to assign. She kept the assignments simple, because she wasn't sure whether students had any art supplies beyond their sketchbooks.

"We’re just using pen or pencil, because I don’t know what the students have at home," Alanis said. "I didn’t want to say a material, and then the student not have it ... I was getting kind of upset that I hadn’t been able to get them more supplies. But I didn’t have enough to give them to every child."

That's when VSC interim director Ellen McCulloch-Lovell sent Alanis information about a program distributing art supplies in New Orleans, and the light bulb went off. With funding from Vermont's Windham Foundation and VSC, Alanis ordered supplies for and sent out 172 "emergency art kits." 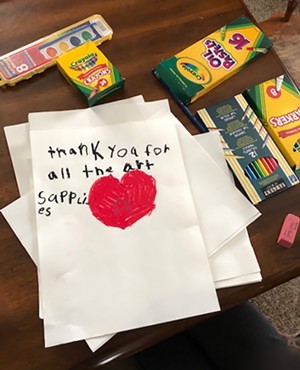 The kits, which will reach 223 Lamoille County elementary schoolers, include drawing paper, colored pencils, an eraser and sharpener, a watercolor set, an oil and pastel set, markers, crayons, and a pack of origami paper. The origami paper was donated by previous VSC School Arts Fellow Sok Song. Johnson students encounter visiting artists from around the world who come for residencies at the center.

Alanis  mailed the first kits on April 8 and said students had begun to receive them by the following week.  She sent one kit per household, instead of one kit per child, as a way of conserving funds for the highest-quality supplies she could get — like the 24-pack of crayons, for example.

"I wanted more than just the eight or the 16," Alanis said. "Call me spoiled."

She credited various collaborators for helping get the idea off the ground, including school colleagues, the town postmaster and her neighbor, who let her pack up the supplies in his heated garage when her apartment proved too small for the task.

"It really took the whole town to bring this together," Alanis said.

Alanis is also a painter, and like her students, she's working in a different setting with limited supplies. She can't access her studio space at VSC during the pandemic, so she's making art at her kitchen table. Every two weeks she visits her students via video chat to talk about their art and show them some of hers.

That last benefit was on display on the very last day of in-person classes in Johnson, as a handful of students gathered in the art classroom. Despite the stress of the situation, Alanis saw her students get lost in making art.

"In one of the classes, for a moment, they were all drawing from observation. It was a still-life of stuffed animals," Alanis said. "We were all in that moment. For a split second, I forgot everything that was happening."
Prev
Next