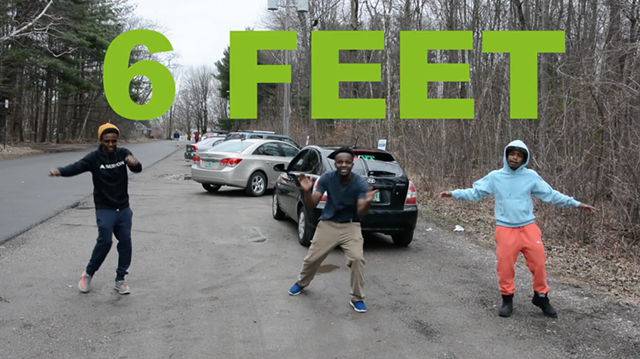 Please, do not press "play" on the video two paragraphs down. You're going to anyway, of course, and, well, that's up to you. But don't say we didn't warn you: You will not get "Dirty Hands" by A2VT out of your head for the rest of the day, and maybe the week.

Then again, that's exactly the point of the song. (And we're kidding. You should absolutely watch the video, earworm-y hooks and all. Go ahead, we'll wait… )

The beloved local hip-hop group composed of African refugees Said Bulle and George Mnyonge — whom you might remember from their locally viral Onion City anthem "Winooski, My Town" in 2012 — released the song and accompanying video on Wednesday. It's a workplace public safety announcement about coronavirus hygiene for the employees of Rhino Foods, the Burlington-based frozen foods manufacturer where A2VT cofounder Bulle has worked for several years.

But it's also sage — and catchy — advice for everyone in the pandemic age and has quickly begun making the rounds on social media. To quote the hook you'll be humming all weekend: "Dirty hands (Wash them!) / Dirty gloves (Change them!) / Six feeeeeet (Distance!) / Safteeeeeey (Makes sense!)."

According to an email from A2VT manager David Cooper, Rhino Foods has been "very supportive" of Bulle throughout his A2VT career. When the company asked Bulle to come up with a PSA under a tight timeline, he worked with Cooper to repurpose an existing A2VT song rather than start from scratch. They used an instrumental version of "Faas Waa" from the band's recent album Twenty Infinity and, Cooper relayed, wrote "essentially a song parody of our own song one day and recorded it the next day."

A2VT Make a Confident Return With New Album 'Twenty Infinity'
By Jordan Adams
Music Feature
"Once we got started, it just kind of wrote itself," recalled Bulle, who goes by Jilib in the band.

"We wanted to show people that there are creative ways to make lemonade, 'cause COVID-19 is a big lemon!" added Mnyonge, aka Pogi.

“With COVID-19 impacting the band’s ability to perform and Rhino working diligently to keep our employees and families safe, it was a great time to team up to make this video," wrote Rhino Foods owner and president Ted Castle via email, adding that the company is looking for ways to support A2VT, since they can't play gigs. "Internally, it was another way, and a fun way, to reinforce critical behaviors," he continued. "It was always our plan to share it with our community and customers; it’s part of our culture to impact the way business is done. And if we can do it with a catchy song, all the better!”

He added, “The song is definitely running through my head.”

In the video — edited by Castle's son, Ned, and his friend, Miles Jewell — A2VT are dancing and singing in the parking lot at Red Rocks Park in South Burlington, which neighbors the Rhino Foods facility. A series of quick cuts follow that show Bulle and other employees inside the facility. One worker is changing her gloves; another scans his forehead to take his temperature. A third, wearing a protective cover, drives a forklift through the warehouse.

At one point, two workers clad from head to toe in personal protective equipment go in for a high five. They stop short as Bulle implores: "Everybody, no hand shake!" That leads to the bit that has undoubtedly been rattling around in your quarantine brain since you pressed play a few minutes ago: "Everybody, SIX FEET BACK!"

"Dirty Hands" clocks in at 60 seconds — or exactly enough time to properly wash your hands thrice, per CDC guidelines.
Prev
Next