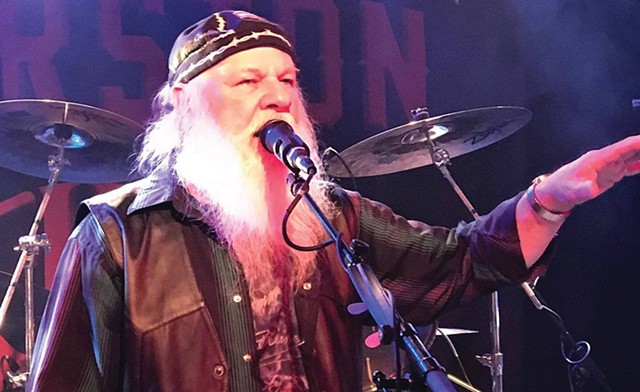 On Friday, December 6, Jimmy T Thurston played a show at the Old Post with his longtime band, the Cobras. In true Jimmy T style, it was a rowdy and raucous night at the South Burlington roadhouse.

"I heard it was crazy good," said Thurston's son, country singer Jamie Lee Thurston. "The whole place was standing up, guitar player ripping solos. I heard it was great."

Though no one knew it at the time, it was also Jimmy T's last show. The Vermont rocker, known to many as "Vermont's Grandfather of Rock and Roll," died on Sunday, December 15. He was 78.

"He lived like he wanted to live and went out six days after a gig," said Jamie Lee. "With the exception of stepping off stage and dropping dead after a show like that, I think that's a pretty darn good way to go."

Jimmy T had been a fixture in Green Mountain rock and roll since the 1960s. Born in Waterbury, the 12th-generation Vermonter played nightclubs, dive bars, juke joints, VFWs and county fairs all over the state for 70 years. He played his first gigs when he was 8, according to a 2012 story in the Essex Reporter.

His bands included the Mustangs, the Jimmy "T" X-perience, the Jimmy T. Thurston Band, Boogy Beast and Jimmy T and the Cobras, the last two of which were perhaps his best known and most successful acts. He also played with a group called Rip Van Winkle and the Sleepy Hollow Boys, the name a not-so-subtle nod to his signature long white beard.

Jamie Lee is a noted country singer-songwriter who grew up performing with his dad in Vermont. He now lives in Nashville, where he's enjoyed some commercial success, including penning tunes for the likes of Trace Adkins and Rodney Atkins. He's performed with country stars such as the late Waylon Jennings, the Dixie Chicks, Jason Aldean and Charlie Daniels. On Saturday, December 14, the night before his father died, Jamie Lee played a show at the Rusty Nail in Stowe.

Jimmy T was supposed to attend his son's homecoming gig, but a couple of days after the Old Post show, he'd begun feeling ill and was eventually diagnosed with a virus.

"I called him on the way to the show and he sounded sick, but he was still cracking jokes," Jamie Lee said.

"It was one of those stellar nights," said Jamie Lee of his Rusty Nail gig. "After the show, he said he and some friends got a couple rooms and got into some tequila. "Ironically, about the time I went to bed was about the time he had gotten up," Jamie Lee said, "and then he passed away not long after that."

Jamie Lee woke up that morning to a flood of messages from friends and family. He eventually called his mother, who told him the news.

"I felt like Mike Tyson gave me a left hook," he said. "Like I got run over by a freight train."

Jamie Lee said that he and his sisters, Debbie West and Vicky Cleland, hope to start a fund in their dad's name, the proceeds of which would go to the music program at the Waterbury Elementary School.

A celebration of Jimmy T Thurston's life is planned for January 5, in the afternoon, at the Ballroom of the Hilton Burlington Lake Champlain — the same room where Jamie Lee used to play New Year's Eve shows with local country radio station WOKO. Specific details are still in the works and will be announced soon. But Jamie Lee said you can count on plenty of music.

"That's a good assumption," he said with a laugh.