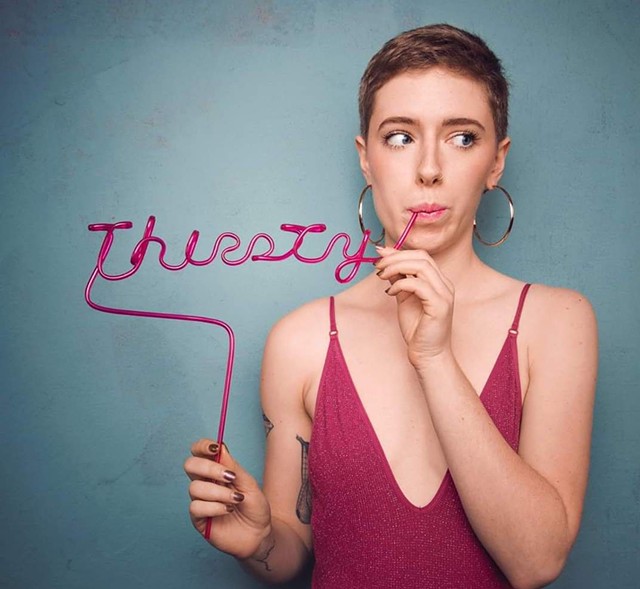 Comedian Anya Volz's big break rather literally came at the 2015 Vermont's Funniest Comedian contest at the Vermont Comedy Club — or, more specifically, a few nights before. Just prior to the annual local standup competition, Volz broke her leg. It would have been understandable — and probably her doctor's advice — for the comic to sit out the contest. But she chose to compete anyway.

"I was like, 'Oh my God. Am I really gonna do this really intense competition when I really should be in bed on pain meds?'" Volz recalls.

The Rutland native, now 23, has since moved to New York City, where she's forging a career in comedy. She performs regularly at clubs all over the city. And she's begun making the rounds on the national festival circuit, appearing at the New York Comedy Festival, Gilda's LaughFest and the Women in Comedy Festival.

Volz returns to Vermont this Wednesday, November 27, to present something of an alt-comedy variety show called Thirst Trap. That's the name of a monthly showcase she runs in NYC that she describes as "a show where art and culture meet comedy and satire."

Seven Days recently caught up with Volz by phone to talk about the show, how she got her start in comedy, the influx of Vermont comics to NYC and how she'd roast Tracy Dolan.

SEVEN DAYS: You started doing comedy at 18. How did you get into it?
ANYA VOLZ: It was something I always wanted to do. As a little kid, I thought I wanted to be a comedic actor — standup wasn't really on my radar. But, basically since middle school, I knew I wanted to do standup.

When I was 16, I realized I wanted to do anything I could to try standup. But there was no real place to do standup in Rutland, and if there were, it would probably be a bar that 16-year-olds can't go to. So I tried it a couple of times in Burlington when I was 18, and then moved there immediately.

SD: How have your experiences in Burlington shaped your experiences in New York?
AV: I started doing standup in Vermont in such a serendipitous time. I started almost exactly one year before Nathan [Hartswick] and Natalie [Miller] opened the Vermont Comedy Club. I became friends with them pretty much immediately, and they became mentors to me, in a way.

In that year, I hustled like crazy — not necessarily to prove anything to them, but because I loved standup and comedy and did everything in my power to do it as often as possible. I didn't limit myself to standup. I just did as much comedy as I could so that, when the club opened, I had a year in. And had done a lot of work to show that I was a strong player in standup. So my first show at the club was Vermont's Funniest Comedian in 2015.

It was really good timing to be new, but not too new, when the club opened. It made me feel confident. But I also knew that I didn't want to move to a bigger scene feeling too confident or comfortable, so I moved the next summer. I didn't want to feel too comfortable or like I had "done it" — like, "Look out, New York City! I'm the queen of this comedy scene!" I wanted to still be humble and ready to learn.

So Burlington prepared me well for that. I went to New York City knowing how to do standup, how to do open mics and how to run a show. But I also moved there with enough humility to not assume that doors would just open for me.

SD: It seems like there is a really strong crew of Vermont comics in New York City now.
AV: Yeah. Honestly, I'm so jealous of them, because they have a whole community of people to welcome them. When I moved there, the only Vermont comics living there at the time were Carmen Lagala and Jess Reed. I was friends with both of them, but two people is hardly a community to catch you. So I'm really happy all those people who have moved since have an actual landing pad, but I'm also a little bit jealous.

SD: You're a trailblazer.
AV: Yeah. You know what, I do it for them. [Laughs]

SD: Tell me about Thirst Trap.
AV: We're coming up on one year, and it's never had a consistent venue. I do it all over the place. Every month I have a different cohost to add some flair to the show. This month it's my friend Gabby Bryan. She also happens to be the cohost for the show I'm starting next month at the Stand. So it's a fun little practice run for us to cohost on Wednesday.

It's mostly standups, but we've also had poetry, different variety acts, music. It occurred to me, bringing it to Vermont Comedy Club, that I wanted it to be more a variety show this time around. So I have Rachel Lindsay reading her comics, because she did that on Welcome to Girlington and it was one of the best nights ever.

My friend Maddy has never done standup, so I'm kind of bullying her into doing a spot on the show to try it. So that's a fun little debut.

SD: And then there are some great local standups, too.
AV: I wanted to bring some old favorites to the show. Tracy Dolan is one of my favorite people in the entire world. When I lived here I would regularly cite her as my favorite Vermont comedian, so it was a no-brainer to have her on the lineup.

SD: Tracy is being roasted at the club on December 4. Will you be there?
AV: No. It's such a bummer. I might send a video of me roasting her, because they want to project videos from people who can't make it.

SD: I was gonna ask you how you would roast her, but maybe now I won't.
AV: You're gonna have to find out! I most likely will roast her for being such a legitimate adult and good human being, yet still making the crazy choice to do standup.

I always say that Tracy Dolan is my favorite friend in the world because, in any other circumstance, she would be my boss who hates me. She would be my boss who thinks I'm the most unprofessional piece of shit ever. But because we do standup together, she loves me and thinks I'm great. And the only way Tracy Dolan and I would be friends is the way that we are currently friends. This is the only timeline.
Prev
Next