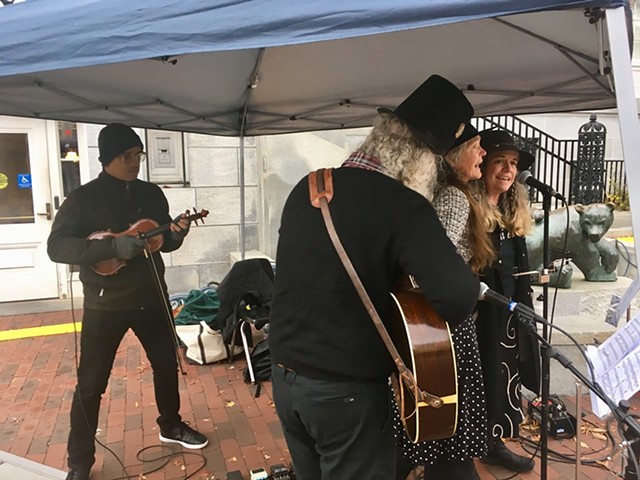 As the clock above Burlington City Hall rang out at 2 p.m., a woman in purple velour pants was dancing a jig under a slight drizzle of rain. The dancer was Paula Higa, and she was accompanying violinist and composer Daniel Bernard Roumain, known by his initials DBR, as he entered the second hour of his 24-hour protest performance on Church Street.

As DBR’s plucking of violin strings turned into dramatic, scratchy notes, Higa moved to dance behind him. Both violinist and dancer sank toward the ground as the song concluded.

DBR and local musicians and artists will perform continuously until 12 p.m. on Friday in protest of Trump administration policies on issues including immigration. More than 30 other groups or individuals had signed up to join DBR as of this afternoon.

The performance was organized and sponsored by the Flynn Center for the Performing Arts and Burlington City Arts. DBR is in the middle of a residency with the Flynn Center, the University of Vermont’s Lane Series and the Vermont Symphony Orchestra.

Next up was writer Cinse Bonino. As DBR played quietly in the background, she read aloud from her book her thoughts on living a life free from fear. Then folk group the New Economistas began belting out songs protesting fossil-fuel dependency.

Daniel Bernard Roumain to Stage 24-Hour Protest on Church Street
By Jordan Adams
Music News + Views
DBR said he expects the company will bolster him through the long hours of the night — physically, in the form of other performers, Flynn Center staff and a security guard; and virtually, on his livestream.

“Playing the violin, for me, is like breathing,” DBR said. He’s taking care to stay limber and hydrated as the hours progress.

He bent down to wave to his on-screen audience and tap out “all love y’all” on the keyboard as a comment on the livestream.

These themes will also be on display when DBR joins poet and performer Marc Bamuthi Joseph in a January performance of The Just and the Blind, a multidisciplinary exploration of race and the justice system, at the Hopkins Center for the Arts at Dartmouth College.

Show and Tell: The 2019-20 Performing Arts Preview
By Seven Days Staff
Performing Arts
Steve MacQueen, the Flynn's artistic director, said the idea for a residency had been around for a while, but that they had been waiting for the right person. DBR fit the bill, he said. The idea for a 24-hour protest came from the artist.

During a break, DBR checked in with the security guard — “You doing OK, man?” — and Madeline Bell, the Flynn's associate director of programming. Bell said the rain was supposed to clear up after 3 p.m. and that they should be able to take down the tents that had been shielding DBR and his equipment. She handed two bananas from her purse to the musician, and Reese’s candy to everyone else.

The music will continue into the night, although between 2 and 7 a.m. the performers will have to go entirely acoustic to comply with city noise ordinances. DBR said he expects to enter a meditative state during the wee hours. The list of the evening’s performers includes State Rep. Brian Cina (P-Burlington) at 1 a.m.

For those who can’t make it down to Church Street to listen, the performance is being livestreamed on the Flynn Center Facebook page.
Prev
Next