WTF: Who Mowed a Giant Peace Sign in a Field Next to Mount Philo? | Live Culture

WTF: Who Mowed a Giant Peace Sign in a Field Next to Mount Philo?

Hikers reaching the summit of Mount Philo State Park in Charlotte have yet another thing to look for amid an already breathtaking view of the landscape. Visible to the west, at the southwestern corner of State Park Road and Mount Philo Road, is a massive peace sign mowed into a hayfield. The symbol, which measures 500 feet in diameter, covers nearly six acres and is visible only from above, seems to have been created deliberately for the benefit of visitors atop the 968-foot mountain. Who created it and why?

Chalk it up to David Diaz, an ophthalmologist from Shelburne who had a vision, as it were, for commemorating the 50th anniversary of the Woodstock music festival, which was held August 15 to 18, 1969.

“I’m no expert on the history of Woodstock nor an unreconstructed hippie," Diaz told Seven Days in a phone interview.  "I’m just an ordinary guy.”

An ordinary guy, that is, with a hayfield, a John Deere tractor and the time, patience and competence with a compass to mow a near-perfect circle and equal-size triangles. Like the festival he set out to celebrate, it took him three days and proved to be a sweaty, muddy success. 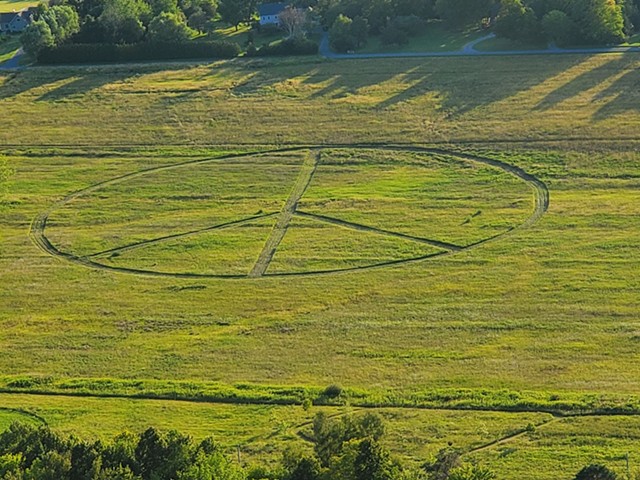 Diaz, who, coincidentally, grew up in Woodstock, Conn.,  admitted that he's never even visited Max Yasgur's 600-acre dairy farm in Bethel, N.Y., where the three days of music, mud and psychedelic nudity were held.  In fact, Diaz, 49, was born four months after the seminal music event that came to define 1960s hippie counterculture.

Nevertheless, he felt a desire to commemorate the 50th anniversary in some small — or perhaps not-so-small — way. Beginning on Sunday, August 10, Diaz went out to the field he owns in Charlotte and used a compass and 250 feet of rope attached to a center stake to draw the peace sign's perimeter. He then measured out the angles in its interior.

“Even doing that, it was like walking in a jungle,” he explained. In spots, Diaz encountered mud and grasses that stood as tall as he is. The rope often got tangled and stretched, requiring him to repeat his work. Mostly, he said, it was very hard to see what he was doing.

“I had confidence in my measurements," Diaz added, "but I had no idea while cutting it what it would actually look like and whether my measurements were accurate.”

Then, after hours of mowing on Wednesday,  and “my feeling fluctuating between exuberance and foolishness,” Diaz climbed Mount Philo to get a bird’s-eye view of his work. “It just about knocked me over, it looked so massive and so correct," he said. "It looked like a stamp of the gods upon the land, this field shouting at you, ‘Peace!’”

Like the original Woodstock it's meant to celebrate, Diaz's creation won't last long. He plans to maintain it for a while, until the farmer who leases his field comes to hay it. In the meantime, Diaz hopes that it brings some joy to people who see it from above.

“In this day and age it’s a statement of belief, frankly," he added. "Our nation, our culture is mad with violence, with assault weapons and murders and a war that’s dragged on longer than any in our history … and leaders who practice violence against the Earth and against the truth.

“So," he concluded, "it’s a statement of belief that's rather bracing and liberating.”
Prev
Next