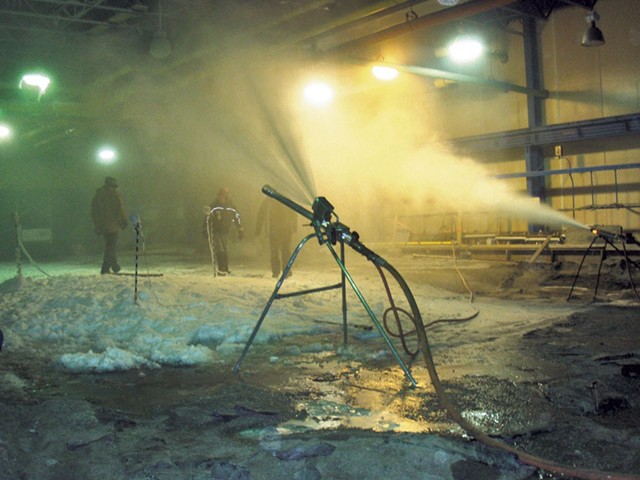 Here's some very cool news out of the University of Vermont: On Wednesday, UVM announced that it has signed a partnership agreement with the U.S. Army Cold Regions Research and Engineering Laboratory (CRREL), which is based in Hanover, N.H. According to a university press release, the partnership will allow UVM students to conduct math, science and engineering research in the facility's Arctic-like laboratories.

Never heard of CRREL? That's not surprising, given that the research facility, which is part of the U.S. Army Engineer Research and Development Center, maintains a relatively low public profile — and even lower thermostat settings.

How low? As Seven Days discovered during a tour of the facility in 2014, CRREL is home to the frostiest year-round temperatures in New England. The 30-acre research campus includes 26 deep-freeze rooms ranging in size from a 10-by-12-foot laboratory that can maintain minus 40 degrees Fahrenheit, to the airplane-hangar-size Frost Effects Research Facility, the largest refrigerated warehouse in the United States.

But despite the U.S. Army moniker, CRREL conducts both military and civilian research, ranging from the study of climate change to the development of new products to clean up Arctic oil spills. And many of the 250 researchers who work there have spent a fair amount of their time at the North and South poles.

“This is a great opportunity for our students to work at the cutting edge of scientific research, with highly sophisticated equipment and skilled scientists,” said Richard Galbraith, UVM’s vice president for research, in a press statement. “Our hope is that it will both enhance their academics and give them real-world research experience that will help them after they graduate.”

To learn more about this frigid facility, check out this October 8, 2014, story, "Cold Remedies: New Hampshire’s cold regions research lab studies everything from potholes to polar ice."
Prev
Next