Gather around, enterprising Vermont kiddos, for a word of unsolicited business advice: Next summer, ditch the lemonade stand. Set up a booth in North Hero and sell rolls of duct tape instead.

Every summer, the town’s residents and visitors buy the sticky stuff en masse for the wonderful, uproarious International Duct Tape Regatta. Proceeds from the race benefit the North Hero Historical Society  in its efforts to preserve the town's iconic Community Hall.

Now in its 14th year, the regatta is practically an institution. Participants know well from the trials and errors of years past how to set their boats — made exclusively from cardboard and duct tape — up for success. (“Thin and pointed,” one young boater told me.)

Spectators, in turn, know where to plop their beach chairs and picnic blankets to get the best views of the teams of one, two and three as they paddle the 900-foot course from the beach in front of North Hero House to the dock by Hero’s Welcome. Those relegated to the dock equivalent of nosebleed seats use binoculars to see the pageantry of rowers and their every catastrophically hilarious boat tip up close. 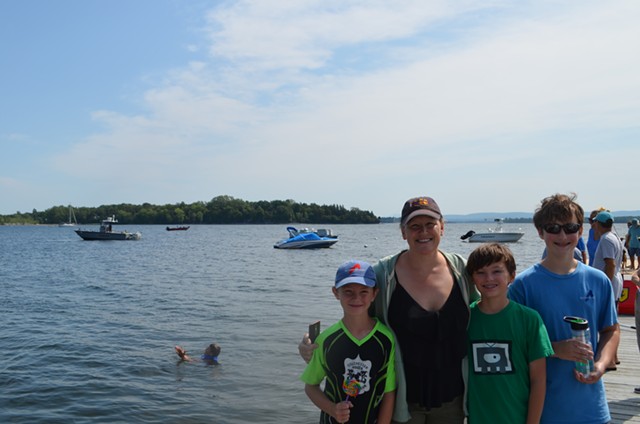 At 9:45 a.m. last Saturday, Route 2 was otherwise quiet, the lake on either side placid and unoccupied.

But traffic slowed by the community hall’s green, where a crowd was gathering. Clumps of kids, waved on by officers, frolicked from one side of the road to the other, powered by the  Hero’s Welcome candy that had already converted into sugary energy in their tiny bodies.

I had only just caught word about the race from a Facebook event, but everybody from the town seemed to be there. Hero’s Welcome owner Bob Camp emceed from the hall’s steps in a backwards baseball cap.

“Our principal goals today are fun and safety,” he said, his voice booming from the speakers. Below him, volunteers registered boats for $10 a pop.

I was immediately captivated by a boat propped up on a stand near the road, bright red and decorated with the Ferrari emblem. Standing next to it was 10-year-old Amelio Ademollo, looking cooler than cool in a pair of reflective aviators. He and his two other triplets would race the boat in one of the team heats. Scenes from the International Duct Tape Regatta
By Sabine Poux
Click to View 9 slides
But the boat only had space for two, I noted. Amelio pointed to the back: His brother Marcello, who fidgeted with his goggles a couple feet away, was going to kick-propel from the water.

The Ademollos — who are Camp’s grandkids — live in Italy, hence the homage to Ferrari. They summer on the island every year and, every year, they participate in the regatta.

Even when they were in the under-six category, the triplets took to the competition with speed and confidence, said Eliza, their mother.

“We would walk along the boat and they zoomed ahead even then,” she said with a laugh.

There were a handful of first-timers, too, among the fewer than 20 boats that entered. Like Dustin Abell from the Grand Isle County sheriff’s department, whose tongue-in-cheek reluctance to mount his flat blue float contrasted starkly with the Ademollos’ unrestrained enthusiasm.

“We’ll see how it goes. I got roped into it,” he said, laughing as he nodded to two uniformed colleagues who were there to watch.

Other standouts included a box-shaped raft designed to look like a Zamboni and a boat labeled “Butler Island Champ.” The latter was was shaped like a small canoe, with a protruding sea monster head and tail on either end. 13-year-old Ben Cardwell raced the boat in the same heat as his twin, Alex, who captained another craft with a similar design. The two had cruised over (in a real boat) that morning from Butler Island, where they were camping with family.

Once the first heat began, the race area was a flurry of kayak and canoe paddles. At best, a boat would make it all the way to the finish dock without capsizing. At worst, it couldn’t even leave the gate, the small waves at the shore’s edge rocking it into submission. But as each made its best efforts to breach the surf, spectators cheered with gusto.

Unsurprisingly — would you expect anything else from a boat modeled after one of the fastest cars in the world? — the Ferrari fleet won first in its category.

“How are you going to celebrate?” I asked the boys, who had jumped in the water after easing into first place. (Most boaters didn’t need to hop in; they were already thrown into the lake involuntarily.)

The victors were still in the water when Abell from the sheriff’s office slid into last place in his heat, the last of the day. But as he noted, he stayed dry; not all can say the same.

Boats all pulled out of the water, competitors and their families paraded cheerily across the street, undeterred by the brutal beatdown of the pre-noontime sun. From his perch, Camp doled out prizes.

"Most eco-friendly” went to Peter Murray, who ascended to accept his plaque with a chain of duct tape rolls hanging over one shoulder. His raft, “Flying Unicorn,” has held up through two years of races — and has won first place in many of them.

The secret? “I just put it up in the rafters of the garage and it stays dry,” said Murray.

I’d like to think there are dozens of garages all over North Hero with duct tape boats in the rafters, waiting patiently for their time to shine come August. For whatever reason, that might just be the cheeriest thought in the world.
Prev
Next