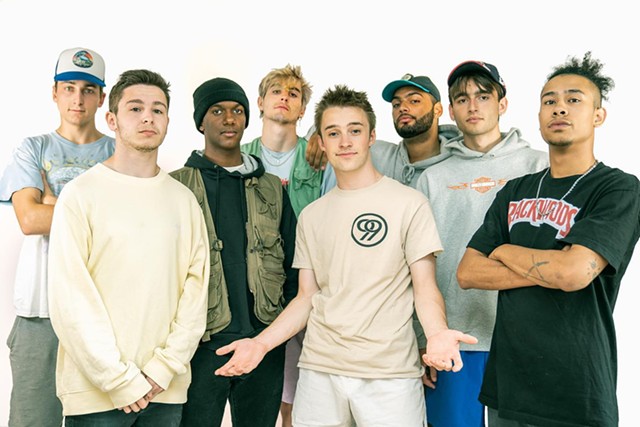 We knew this day would come.

Burlington hip-hop collective 99 Neighbors have taken one step closer to the big time. As Complex reports, the group has entered a relationship with Chance the Rapper manager Pat Corcoran's entertainment group Nice Work, which has struck a deal with Warner Records. To celebrate the partnership, 99 Neighbors will release a new single and video, "Fake Pods," on Tuesday, July 30, at noon EST. The track will premiere on Zane Lowe's Beats 1 Radio Program on Apple Music.

"Thanks to this new partnership, we have some new flexibility and resources," said 99 Neighbors manager Cal Rawlings in a recent phone call. He noted that, despite signing with a major label, the group will retain full ownership of its music forever, as well as retain creative control of future work.

The arrival of the deal suggests the group may not be sticking around Burlington forever, though Rawlings did not confirm or deny if the group would be moving on.

"We're all from here and have a strong attachment to this area," said Rawlings. "We created all of the music here, [but] there's probably some desire to move somewhere else."

99 Neighbors first burst onto the local music scene in 2017, with producer Somba and rapper Sam Paulino's debut EP, The South Cove. Since then, the group has grown into an eclectic ensemble, and has released three additional albums: Sam Paulino's Collision, rapper Hanknative's Problem Child, and the collective's debut LP, Television. Listen below.