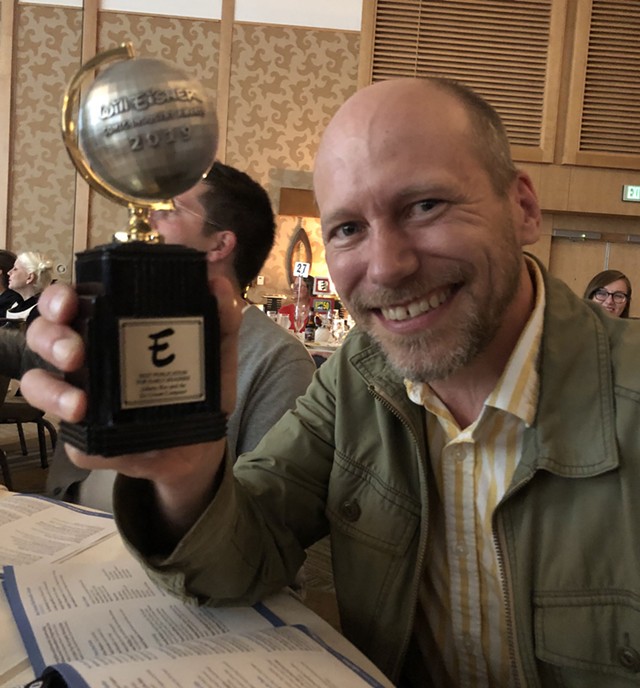 James Kochalka has won another Eisner Award. The Burlington-based cartoonist and musician took home the prize for Best Publication for Early Readers (up to age 8) for his 2018 book, Johnny Boo and the Ice Cream Computer. He accepted the honor at the the Will Eisner Comic Industry Awards ceremony on Friday, July 19, during San Diego Comic-Con.

The Eisner Awards, which celebrate creative achievements in American comics, are among the most prestigious honors in the comic industry.

"They're like Oscars for comics," said Kochalka, "but cooler, because it's comics."

The 2019 award is Kochalka's second Eisner, and his second in the Early Readers category. He also won in 2012, the category's inaugural year, for his book Dragon Puncher Island.

"If I had lost, having won one before would have taken some of the sting out of losing," said Kochalka, who has been nominated for several other Eisners since the awards were founded in 1988. "But it still woulda hurt because it always does. It actually doesn't hurt as much being not nominated as it does to be nominated and lose.

"But oh my God, did it feel great to win!" he continued.

Johnny Boo and the Ice Cream Computer concerns a young ghost, Johnny Boo, who creates a computer — almost more of a robot, said Kochalka — that can turn any ingredient you put in the top into that flavor of ice cream. The story takes a turn when Johnny's best friend, Squiggle, another little ghost, flies into the top of the machine.

"It kinda works differently on him," Kochalka explained. "It just makes hundreds of Squiggles."

That book is the eighth in a series of Johnny Boo books that began with Johnny Boo: The Best Little Ghost in the World in 2008. Book nine, Johnny Boo Is King, came out in the spring. A 10th installment, Johnny Boo and the Midnight Monsters, is due out in September. The series has been picked up by the Scholastic Book Club, which offers affordable books for young readers.

In music news, Kochalka said he's presently collaborating with Matt Farley, a novelty musician who recently released his 20,000th song. Farley, who makes music under at least 70 different pseudonyms, is probably most famous for his rather unusual — one might say feces-tious — connection to Amazon's Alexa.

"So anyhow, I'm working on a collaboration with that guy."