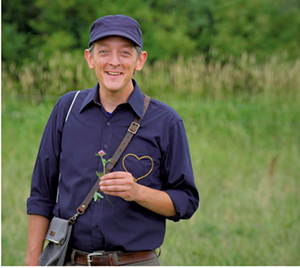 The talking Wishing Well on Vermont PBS has granted another big wish: "Mister Chris and Friends" is coming back for a second season of family-friendly music and merriment.

The show, which launched in November 2018, features live music, movement and "everyday adventures" throughout Vermont, which allow kids to explore science, nature, and emotional and social development. Designed primarily for preschoolers, "Mister Chris and Friends" is hosted by the show's eponymous co-creator and star, Chris Dorman of Shelburne.

"Season two of 'Mister Chris and Friends' celebrates themes of change and transition throughout its six episodes," Vermont PBS explained. "The sound of spring peepers inspires an exploration into the life cycle of frogs in one episode, and in another the search for a missing dog provides an opportunity for a sensory adventure about tracking animals. New family moves to the farm and inspires a conversation about what someone needs to feel at home."

Even before the show's premiere last fall, TV critics were comparing Dorman's work to that of the late Fred Rogers, legendary creator of the PBS series "Mister Rogers' Neighborhood." Gentle, soft-spoken and music-oriented, Dorman travels through the Green Mountain State blending science, technology, engineering, arts and mathematics-based concepts at a pace that's slower, calmer and more thought-provoking than much of today's consumer-oriented children's programming.

The show's target demographic is kids ages 3 to 6. But, as Dorman explained in an interview for this Seven Days story last year, "If we meet them where they are in a way that deeply respects them, we won't just reach them. We'll also reach kiddos who are younger, who are more sensitive, and who are older ... [in a way that] leaves them feeling respected and listened to."

Season two of "Mister Chris and Friends" will debut this fall on Vermont PBS. Full episodes of season one can be watched here.
Prev
Next