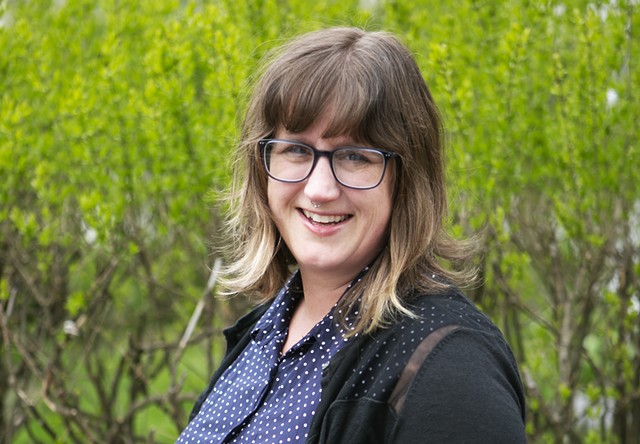 It didn't seem like the best time for Margaret Coleman to take on another job. Co-founder and executive director of the national nonprofit Art Shape Mammoth, founder and director of the O.N.E. Arts Center in Burlington, and mom to two little ones — ages 2 and a half years and 4 months — she had her hands full.

In recent months, too, Coleman had taken over management of Flynndog gallery and was involved in developing new arts spaces in that South End building. "It's wild timing," she conceded.

But none of this stopped Coleman from applying for, and accepting, the position of executive director at Montpelier's T.W. Wood Gallery. She was won over by "the commitment to accessibility [to art] and the historic collection." She also liked the gallery's diversity in programming, including after-school classes, adult classes, art camps and exhibition space for contemporary exhibitions, as well as works from the Wood collection. The gallery also hosts film nights for local filmmakers and other community events.

The Wood "is at a place in history where it has the potential for growth, and I'm excited by that," Coleman said. "It's an open book for what can happen."

Coleman earned a BFA from the University of Minnesota and an MFA from the Pratt Institute, and she's a PhD candidate at the Institute for Doctoral Studies in the Visual Arts, a low-residency program based in Portland, Maine.

Elliott Bent, president of the board of the T.W. Wood Gallery and a member since 2017, said that the board hired Coleman because of "a demonstrable commitment to building community through the arts. In talking to her you immediately see it's integral to her personality."

Second, Bent continued, is Coleman's "staggering amount of experiences. She blew us away with the number of leadership placements — teaching art to children in Iceland … Art Shape Mammoth, her art activities in Burlington. She's a doer; she just makes things happen."

Coleman is replacing Ginny Callan, who was the gallery's executive director for the past four years and is retiring. The nonprofit has two other employees — an after-school arts coordinator and an office manager — as well as "an incredible number of volunteers," Bent said. All of the board members are active, too, he adds.

Thomas Waterman Wood (1823-1903) was a Montpelier native and an acclaimed artist who eventually headed both the National Academy and the American Watercolor Society. His paintings, watercolors and other items were bequeathed to the city, along with works he had accrued from other artists of the time.

Notably, Wood copied paintings by famous European artists such as Rembrandt, Titian and Turner in order to expose viewers back home to world art. He also was one of the first American artists to depict African Americans individually in his genre paintings. After the Great Depression, the gallery was chosen as the Vermont repository for artworks created for the WPA (Works Progress Administration).

The T.W. Wood Gallery resided in several locations over the years and now owns — along with the Monteverdi Music School and the River Rock School — a former Catholic elementary school on Barre Street. Collectively called the Center for Arts and Learning, it also houses more than 25 artists, writers, nonprofits and makers, according to the center's website.

This collaborative community setting attracted Coleman, who said she appreciates "the commitment to culture." Reached by phone during her first commute to Montpelier — she lives in Burlington — Coleman explained that the T.W. Wood Gallery board is allowing her to ease into the job part time as she steps back from obligations with Art Shape Mammoth, O.N.E. Arts and the Flynndog; she'll stay on as a board member or adviser with those enterprises.

"There's a lot of cutting back to take this job," Coleman acknowledged. "But jobs in the arts in Vermont are scarce. I didn't know when something like this would come up again."
Prev
Next