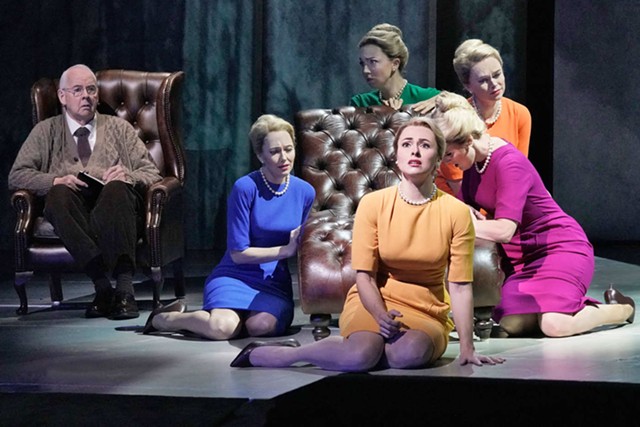 In his latest opera, Vermont-born composer Nico Muhly, along with librettist Nicholas Wright,  reimagined Winston Graham's 1961 novel Marnie. The story follows a beautiful but troubled young woman who assumes multiple identities. Marnie, played by mezzo-soprano Isabel Leonard, compounds layers of deception as she drifts from job to job and lover to lover, eventually landing in the cruel, abusive grasp of a wealthy businessman, Mark Rutland, played by baritone Christopher Maltman.

The book inspired Alfred Hitchcock's disturbing 1964 film of the same name, in which the filmmaker used shuddering camera work and long, leering shots to render Marnie's increasing derangement. For his version, Muhly turns to music — specifically, his gift for mysterious tonality and dramatic composition — to convey the lead character's inner mania.

After premiering in London last year, Marnie opened at the Metropolitan Opera in New York City last month. It's the second Muhly opera commissioned by the Met. The first was his acclaimed  2013 work Two Boys.

Following a seven-show run, Marnie closed on November 10. If you missed it, either live or via one of the numerous "The Met: Live in HD" simulcasts, despair not. Town Hall Theater in Middlebury presents an encore broadcast of the opera this Sunday, November 18 — exactly one year to the day after it originally premiered in London. Seven Days recently caught up with Muhly by phone.

SEVEN DAYS: What was it about the story of Marnie that you thought would lend itself well to opera?
NICO MUHLY: First, the director, Michael Mayer, called me up and said, "Wouldn't this make the most fabulous opera?" And he was right. The reason is this: I've always said that operas are inevitably about lying. All operas contain at the heart of them some kind of deceit. What I thought was great about the character Marnie is: that's all she does. Then she gets involved with this family and this guy who also lies. So everyone is deceitful. No one is OK. It seemed to me to be the perfect thing to show on stage, using all the history, the weight, of opera.

SD: Most people are probably more familiar with the Hitchcock film than the book. Did you make a conscious effort to divorce yourself from the film?
NM: Of course. This was actually a fairly simple process because the film was so radically different from the book. The things that [Hitchcock] did to the book to make it work as a film just don't work for opera.

The thing that makes Hitchcock great is this fantastic visual thrill. And with an opera, we have to do that with music. So Nick Wright, the librettist, and I actually found it fairly easy to disembarrass ourselves from the film and just focus on the novel.

SD: How did you use music to get at the larger themes of the story?
NM: The first question is figuring out what to do with all of these voices. Then from there, it was figuring out what kind of sonic landscape I want the chorus and orchestra to occupy.

The chorus functions in two different ways: They function as realistic things — people in a typing pool, people at a cocktail party. And then suddenly they can switch into being abstract people in Marnie's head. So there's this constant dance between something that's real and something that's not  real that gets more and more intense as the piece goes on.

The other thing was figuring out what the function of long, sustained vocal passages would be, because that's a question in opera: Do you have arias? What's that function?

SD: What lessons did you take from Two Boys that you could apply to Marnie?
NM: I can give you two examples. One is super practical and the other is more emotional. The practical thing is that the music is the governing text behind everything that happens on stage. But physically, in order for it to be dramatically valid, there is a whole other register of stuff you have to worry about: How do you get 68 chorus people on stage in the middle of something quiet? How do you get the stage to obey the idea of being in one space, and then another space, really quickly?

These are challenges for the director. But one thing I learned coming out of Two Boys, which is the emotional thing, was that to be a really good collaborative composer, you can have that conversation from the beginning. You can treat it with the the understanding that other people will be interpreting the text, as opposed to just being like, "Well, they'll just figure it out."

SD: In the New York Times review of Marnie, the reviewer drew a connection between the #MeToo movement and how Marnie comes to expect shitty behavior from all of the men in her life. You started working on this years before #MeToo, but did you become conscious of those themes in the story as you went along and that movement grew?
NM: Yes and no. We started this project in 2014, very much pre that moment. But one of the things that we were thinking about when we were building this in London, and those conversations were happening much more explicitly, was that most art, let me put it this way: If you were going to stage Don Giovanni today, there's no way you could do it without acknowledging this environment we're in as a culture, as a group of cultures. But you don't have to change Don Giovanni to do that.

So we found that we had written something that was incredibly prescient without doing it on purpose, which I think is actually better. Because that was a very complicated conversation and continues to be. So the piece had space for the combination of  the moral, black-and-white decisions that we all know to be true and the endless, complicated nuances of these things that the actors will have the ability to find something they can sink their teeth into, dramatically.

That's a long way of saying that  I can't be like, "I am a white, gay man, and I know exactly what I'm gonna say about hashtag Me Too!" Instead it has to be an environment in which performers should feel like there is room to think about those things and communicate that to an audience.