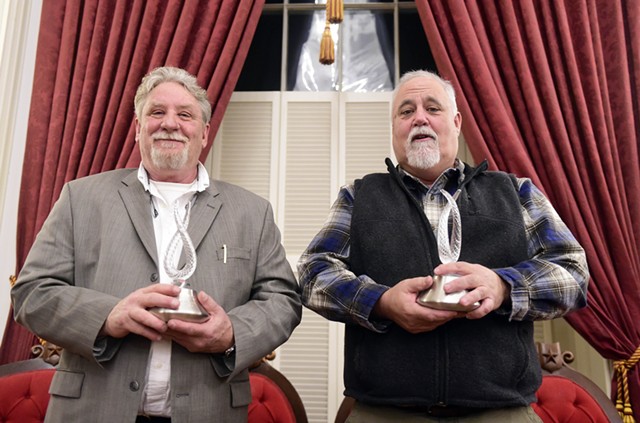 
This year’s Award for Excellence in the Arts went to two recipients, selected by Scott from among 20 nominees: Sculptors Chris Miller and Jerry Williams, who worked together on a new Ceres statue for the top of the Statehouse dome. (The previous one had rotted and was removed earlier this year.) The figure, an allegorical representation of Vermont’s agricultural heritage, will be installed on November 30.


Miller, who lives in Calais, creates figurative and representational installations in granite, wood and marble. His work, featured in private collections and galleries across New England, includes a 9/11 memorial in Staten Island, N.Y.; a topographical interpretive watershed table at the University of Massachusetts Dorchester Science Center; and a 74-foot granite zipper at Studio Place Arts in Barre.


Johnson resident Williams has worked in Vermont since the mid-’80s, when he established the Barre Sculpture Studios. He had apprenticed with Frank Gaylord, creator of the Korean War Veterans Memorial in Washington, D.C. Williams has worked on public and private commissions across New England, Texas and the Midwest.


In accepting the award, Williams thanked Gov. Scott and the arts council for giving him an excuse to venture out of his studio. “Every once in a while, we artists get to put on clean clothes and engage with the public,” he quipped.


The evening’s other honorees were:


Alison Bechdel received the Walter Cerf Medal for Outstanding Achievement in the Arts. The Bolton resident is the creator of the hit lesbian comic strip "Dykes to Watch Out For," author of two graphic memoirs, progenitor of the "Bechdel Test" (a measure of the representation of women in fiction), and a 2014 MacArthur fellow. A musical based on her first, best-selling memoir, Fun Home: A Family Tragicomic, garnered five Tony Awards in 2015, including Best Musical. In 2017, Bechdel was named Vermont’s third cartoonist laureate. She is currently at work on a new graphic memoir, The Secret to Superhuman Strength.

John Willis received the Ellen McCulloch-Lovell Award in Arts Education. The Dummerston resident has been a professor of photography at Marlboro College for the last 28 years and is a 2011 Guggenheim Fellow. Willis cofounded the In-Sight Photography Project, a program that offers free photography classes to Brattleboro youth, as well as the Exposures Program, a photography intensive that has taken students from Vermont and New York City to the Pine Ridge Reservation in South Dakota.

Willis' work is featured in numerous permanent collections, including the Whitney Museum of American Art, the Tokyo Metropolitan Museum of Photography, the Bibliothèque nationale de France and the National Museum of the American Indian.


Hinesburg resident Allison Coyne Carroll, the recipient of the Margaret L. (Peggy) Kannenstine Award for Arts Advocacy, is the director of the Middlebury College Performing Arts Series, curating visiting-artist performances and residencies for the community. Carroll, who studied music and French horn, worked as the Vermont Symphony Orchestra’s chorus coordinator and assistant to director Robert DeCormier before joining the Middlebury staff in 1997. As a musician, she has performed with numerous Vermont ensembles, has been a featured vocal soloist and sung choral works on four record labels.

Judith Chalmer, the recipient of the Arthur Williams Award for Meritorious Service to the Arts, is a poet and advocate who lives in Burlington. From 2005 to 2017, she was executive director of VSA Vermont, an organization that helps children and adults with disabilities participate in the arts.

Her poetry, which has appeared in more than 50 volumes and anthologies, has received honorable mentions from the Pushcart Prize, among other accolades. Chalmer is also the author of a collection of poems and co-translator of two volumes of Japanese haiku and tanka, including Deepening Snow, which she produced in collaboration with Montpelier poet Michiko Oishi.
Prev
Next