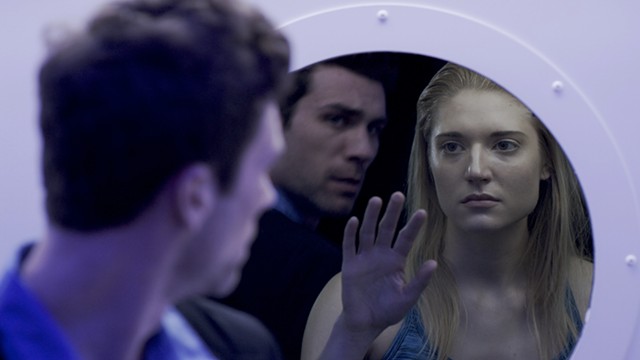 On Saturday, September 22, in Burlington, Vermont filmmaker Jay Craven offers two preview screenings of Wetware, his 10th feature. Craven is well known for his period adaptations of  Vermont-centric novels by the late Howard Frank Mosher, including Where the Rivers Flow North (1993) and A Stranger in the Kingdom (1999). His latest is a distinctly different venture.

Rife with moody neon and existential angst, Wetware takes place in the near future, in which human genetic enhancement technology is being woven, with snags, into the fabric of everyday life.

In advance of this weekend's screenings, Craven fielded questions from Seven Days.

SEVEN DAYS: What first grabbed you about Putney-based Craig Nova’s 2002 novel, Wetware, amid a sea of deeply existential, future-oriented stories?
JAY CRAVEN: Nova is known as a writer of literary fiction, and that quality of his vivid descriptions of character and place fascinated me. I was also interested in his idea of enhanced humans. I read his book [when] I was making After the Fog, a documentary film about the lifelong impact of combat on soldiers from WWII, Vietnam and Iraq. A senior U.S. government researcher told me about work to genetically modify soldiers so that they wouldn't have a traumatic response to violence.

More research talked about these enhancement strategies to also erase emotional memory and engender fearlessness in the face of extreme danger. The ethics of these practices and ideas connected with what I saw as some of the themes in Nova's novel, so it interested me.

SD: As you've noted, Wetware is a huge departure from your previous film projects, all of which were set in the past. What was most challenging or surprising about shifting focus?
JC: The biggest challenges had to do with creating a near-future world on a low budget. I loved that challenge and had a lot of fun with it — and enjoyed working with our fabulous young production designer, Alina Smirnova, to create that world.

I also committed to trying to maintain a character-driven narrative in a story that is pretty heavily plotted, while also allowing the plot to progress and, hopefully, intensify. There is a different rhythm to that compared to my other films, so that was also a challenge. This film is also darker than my other pictures. Another big challenge was working with actors to create characters that are not fully human but also not replicants.

SD: In a similar vein, you filmed in Burlington and Brattleboro (and Nantucket), but, unlike many of your films, the look and feel of Wetware is noirish, urban and distinctly un-Vermont and un-New England. How did you go about using familiar locations in unfamiliar ways?
JC: I looked to find locations that would allow us to develop a noirish feel in each of our locations so that we could knit them together into one imagined place. Because, no, my other films are specific to a place and work with that idea. Here, we created a fully fictional place, actually an island and a mainland place.

We looked for back alleys we could dress for that noir feel, using neon in particular. There's a great alley behind Bennington Potters [North] that worked very well for our seedy noir hotel exterior; the interior was backstage at the Latchis Theatre in Brattleboro and matched perfectly.

We built one noirish set (the gaming parlor) and one futuristic set (the prototypes' growing room) and found other additional futuristic locations like the ECHO center exterior, the lobby of One Main Street train station (which also has a touch of ’50s noir), an ECHO stairway, an office at Burlington City Arts and a hallway at the Nantucket Community Music School. These, combined, created the look and feel for the Galapagos Genetic Technologies lab — a futuristic setting to contrast with the noirish places.

We bought a couple hundred neon light bars that we had shipped by boat from China. These lights came in handy all over the place to create a palette that alternately suggested both noir and future, depending on the colors used.

I normally want to use locations I know well to suggest detail of known place and additional dimension and thematic resonance linked to that place. For Wetware, I wanted to look at these same places from a very different perspective and synthesize them into something unfamiliar and new. But I still wanted the place to help convey story and character themes, like in my Vermont films.

SD: The virtual reality scene is absolutely stunning. What was the process you and John Douglas used for both conceiving of and creating its look and texture?
JC: John Douglas created his Auto-Warming animation that shows cars moving slowly through a traffic jam with water rising. John showed it to me, and I immediately wanted to find a way to include it in our film to suggest a climate change anxiety lurking on the subconscious. I always liked how Godard used a traffic jam in Weekend and Fellini in 8 1/2, so this was my chance. John's work here is quite responsive and as timely as this week's news.

Colorado animator Evan Mann produced the gaming parlor and VR scenes. I discovered him through a mutual friend, media artist and native Vermonter Catherine Siller. They went to Rhode Island School of Design together. Working with students, we wanted to avoid a typical video game look and explore a "neural feedback interface" that combined future technology, Jungian ideas about the subconscious and handmade animation instead of digital imagery. I hope it works — it's a bit out of left field.

SD: You worked with a lot of students in making this film. You've written that discussion was an important part of bringing Wetware to life and that “we concluded that the future is now, especially in the rapidly shifting worlds of climate, technology, politics and intensifying conflicts at home and abroad.” Can you talk about some of the materials you used in shaping these discussions?
JC: I mentioned the discussions I had with the senior researcher at the Veterans Administration regarding gene splicing to prevent PTSD. Further research was conducted online and in the New York Times, where a big meeting was reported in June 2016  at the Harvard Medical School; doctors and scientists reported progress on creating an artificial genome — humans with no biological parents. A likely primary utilization was specified for soldiers.

A July 2018 op-ed, “Rebooting the Ethical Soldier,” by retired Air Force major general Robert Latiff, poses a number of ethical questions about a rapidly approaching future in which enhanced humans are sent as soldiers into war on highly automated battlefields.

We examined reports on rising seas levels due to climate change, along with plans to build a tornado wall 1,000 feet high and 100 miles long  to block moisture coming from the Gulf of Mexico and prevent it from colliding with cooler arctic air, which causes tornadoes. And we researched moves to start commodifying climate assets, like targeted rain.

We also looked at the question of expendable humans and modified behaviors — and the lack of governmental accountability in researching the CIA's use of LSD to drug 7,000 unknowing suspects, through its MKUltra Project during the 1950s and early ’60s. A 5-to-4 1987 Supreme Court decision (United States v. Stanley) ruled that the government bore no liability for these druggings, even when the targets of their experiments committed suicide or went nuts or were separated from their families.

The ruling held that, when you are under the government's jurisdiction, anything can happen and that to assign liability to the government for whatever results would intrude into military matters.

SD: Wetware seems to take an ultimately cynical view of genetic enhancement technologies. Do you share the story’s anxieties about how scientific developments may impact both class structure and emotional experience?
JC: We're not experts, but I do believe that we're sprawling headlong into a near future where genetic technologies will start to become more common and can be used to create subclasses of enhanced or modified humans, with no clear vision for what all the ramifications will be. One thing we discovered about genetic modification is that you will also get unexpected side effects when altered genes interact with native genes. No one can prevent that, at least not yet.

But some of these alterations will certainly affect class stratification. At the least, wealthy families will be in a position to pay for treatments to enhance looks or intelligence, while it appears that other uses may be used to enhance the strength of soldiers and mitigate their responses to fear, pain and trauma.

As retired major general Latiiff asks in his New York Times article, "What will happen when these soldiers feel no guilt or fear or sense of limits or consequences? And what will happen to these altered people when they come home? Will they live freely in our communities? Or will they be segregated and have fewer liberties?" There are many unanswered questions.

SD: How has Nova reacted to your adaptation?
JC: The film is substantially different than the novel. As I say, Craig's great skill is in his vivid and highly imaginative and detailed descriptions of time, place, character and theme. There is enough material in his book to make six films. We pulled what we felt could work for our modest production and worked with students who leaped into animated discussions of character, plot, gender, theme and more.

But the novel always provided a fertile jumping-off point for discussion and script development — and a rich source of dialogue and beautifully shaped renditions of incidents and moments. We filmed some things we didn't use, too. But we've very much enjoyed every minute of our interactive journey with Craig's material, and where it has led us.

Craig says he likes the film and finds its exploration of these ethical questions compelling. I have no doubt that when he closes his eyes and thinks of his novel, he sees other images, too, and some themes, no doubt, that could be further developed. But this is what we did with what we had.

We still don't know the end result, even though the film is finished. The film now starts its journey with audiences, and that will inform us as much as the production itself has done.

After just two preview screenings, I have 20 complex and stimulating thoughts about Wetware that I'm having for the first time. It's similar to my experience with my 2006 film Disappearances, where I ended up writing 50 pages of new thoughts about it as I toured throughout Vermont. Many of these were prompted by audience reactions. I expect that will now happen again.
Prev
Next