In the American classic The Souls of Black Folk, W. E. B. Du Bois asked, “How does it feel to be a problem?” The book, written during the Jim Crow era, consisted of several essays on the black experience, including the rise of the black church, education in the South and racism.

More than a century later, Moustafa Bayoumi posits that Arabs and Muslim Americans are the “new problem” of American society since the terrorist attacks of September 11, 2001, and the wars in Afghanistan and Iraq.

They “now hold the dubious distinction of being the first new communities of suspicion after the hard-won victories of the civil-rights era,” wrote Bayoumi in his book, How Does It Feel to Be a Problem?: Being Young and Arab in America. Born in Switzerland and raised in Canada, he's a professor of English at Brooklyn College.

Narratives about the Arab community have often been framed by the lens of terrorism, noted the author. Published in 2008 by Penguin Books, Bayoumi's work chronicles the complex lives of seven young Arabs — six Muslims and one Christian — in Brooklyn. 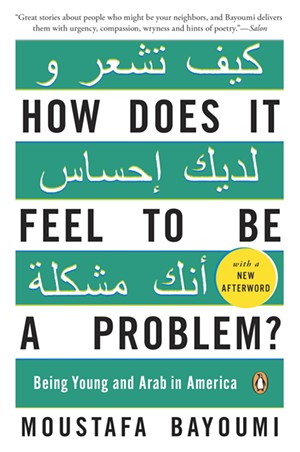 Bayoumi said he wanted to flesh out the lives of the people more than only their conflicts.  One of them was Syrian-born Rasha. She and her family were  rounded up and detained on possible terrorism connections; they were released three months later. Another was high schooler Yasmin, who was forced to resign from the student council after she refused to attend a school dance due to her religious beliefs.

On Thursday, September 6, 7- 9 p.m., Bayoumi will discuss his book and related contemporary issues at the Livak Ballroom at the University of Vermont Davis Center, as part of the Will Miller Social Justice Lecture Series.

Seven Days spoke with Bayoumi to find out more about his motivations for writing the book and his attempt to normalize the pluralism of the English language.


SEVEN DAYS: Tell us more about the book and your writing process.

MOUSTAFA BAYOUMI: The book was an attempt to portray the struggles in Arab and Muslim communities in New York that I thought were not getting heard beyond the community. One of the things I wanted to do was portray the different kinds of issues that were present in the community from a broad perspective. I only knew one of the people that I wrote about before I began writing the book. I met all the people that I wrote about in the course of writing the book. It was a really important journey for me, not only to get to know them, because they are such extraordinary people, but also to get a sense of the kinds of efforts they were making to overcome the struggles that were confronting them.


SD: How did you choose the seven young men and women?

MB: It was a combination of the pure interest level of their story and, also, the different issues that I thought were being very relevant to the community at that moment. I knew, for example, that I was interested in talking about the detention that happened within the community, because those had a profound effect on people's consciousness and on people's life in Brooklyn. Very little of that resonated outside of the Muslim-Arab community. The Yasmin story, there's no way you can go searching for a story like that.


SD: How have things changed for the Arab and Muslim communities in the last decade?

MB: A lot of things have happened in the last 10 years. Some good, but mostly bad. The level of hostility, alienation and racist anger against Arabs and Muslims has risen dramatically. I think it has become part of our politics. Now, it's been instrumentalized into our very politics so that we have a president who very directly campaigned on villifying Muslim people from around the world. And not only that; at this point he's successfully introduced the Muslim ban, which I see has a legacy that goes all the way back to Chinese exclusion law, to Japanese internment. Now we are back to making laws that are not really based on rational threat but really on just the basis of our own national prejudice.


SD: Until I read your book, I had never seen the word salaam ("to greet" in Arabic) being used as an English verb and not in italics.

MB: That was a decision of mine when I was writing the book. I talked to my editor and we worked with the copy editor on that. Also, I decided very early on that I wanted to have the book be as much a naturalized reading experience as possible. I didn't want to have to explain all the terms and have a glossary. I think that's important as a way to emphasize the pluralism of not just the American society but also the ways in which we all speak English in this country.


SD: In the last decade, has there been a sustained interest in your book, or did you see any spikes?

MB: Generally speaking, there's been a constant interest in the book in terms of if I look at my speaking schedule. But it definitely did spike and that was when Donald Trump first came on the national stage and when he announced the Muslim ban. And ever since then, the interest has been higher.


SD: Why did you decide to change some of the personal details of the people portrayed in the book?

MB: A book like this is really fundamentally based on trust between the subject and me. I wanted to make sure that there was a high level of trust between us at all times.

The first thing that everybody asked me was, "Are you going to use my name?" And the second question was, "Can I read it before it's published?" I said, "I'll only use first names for the book." They were fine with that. One person wanted a name change.

When they asked me if they could read it, I told them what I would do is give them a draft copy before I send it to my editor. It would be essentially what was going to be [in the book], but I wouldn't promise that would be the final version.

I was doing it as a fact-check as well. They were telling me a lot of details about their lives and I was taking notes and recording when I could. I just wanted to make sure I also had everything correct.


SD: Would it have been more difficult for you to write the book if you didn't make the accommodations?

MB: I think it would have been harder, I do. Absolutely.
Prev
Next