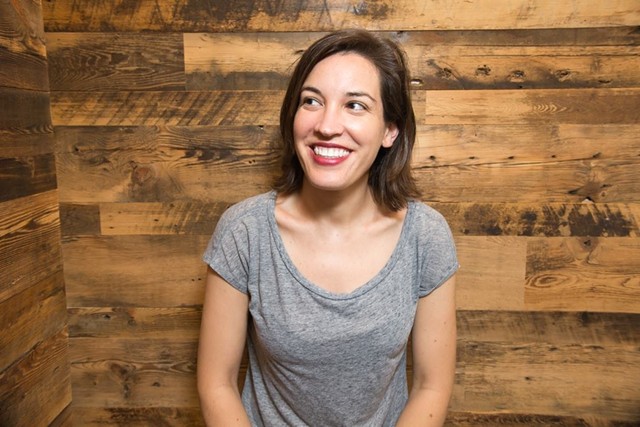 On July 19, the Burlington comedy scene took a victory lap when comedian and Vermont native Carmen Lagala made her national television debut with a set on "The Late Show with Stephen Colbert." Check it out below:

Lagala moved to Brooklyn from Burlington in 2014 but has been a prominent figure in Vermont standup circles since making the finals of the Higher Ground Comedy Battle in 2011. She won the contest in 2013. The Montpelier-born comic was a finalist several times in the annual Vermont's Funniest Comedian Contest. She was also co-owner of the now-defunct Burlington comedy club Levity and is still a member of the Vermont Comedy Divas. In short, Lagala's roots in Green Mountain comedy run deep.

Her celebrity was evident in the hometown hero's welcome that her "Colbert" set garnered in Vermont — the response was sort of like when one of our Olympic athletes scores gold, only way funnier.

The Vermont Comedy Club in Burlington held a special viewing party the night of Lagala's appearance. The following day, friends, family, fans and fellow comics shared her set dozens upon dozens of times on social media. In possibly the sweetest, most hilarious response, fellow Vermont expat comic Kendall Farrell, who now lives in New York City, videotaped his mother's reaction to Lagala's set — and then, still filming, cajoled her into reading one of Lagala's older (and dirtier) jokes.

Lagala performs on Wednesday, August 1, at the Vermont Comedy Club. Seven Days recently caught up with the comic by phone.

SEVEN DAYS: I imagine the "Colbert" taping must have been a pretty surreal experience.
CARMEN LAGALA:  Oh, yeah. It was really fun. It was nerve-wracking, obviously. We taped it about one month before it aired with a group of six other comedians, so they kind of cut it into the show as if he's there and as if you're doing it that day. But the staff is so incredible, and it's really fun.

I was a little nervous … not even nervous, excited. But as I got into it, I was like, "Oh, this is just telling jokes like you would anywhere else, except they're gonna clap and throw off your timing."

SD: So did you actually meet Stephen Colbert?
CL: No. But I got a very nice gift basket.

SD: Ooo! What was in the gift basket?
CL: There were some hot sauces from his hometown. And I got a portable speaker. And they give a gift card that you can donate to the school of your choice. So I got to look through all these projects online and found some from Vermont I got to donate to — like these people who are using puppets in their classrooms. So you get to dole out money and feel like a king.  It's great.

SD: You taped your set a month ago. What was it like finally watching it so much later?
CL:  I had a party-slash-show at a local bar that I really like. They projected it on the wall and had the sound on. So I got drunk. [Laughs] And I haven't watched it sober, because I haven't watched it since. I don't know, I just can't do it.

SD: How has your experience in the Vermont comedy scene informed your time in New York?
CL: I think it gave me some early confidence that, as somebody with extremely low self-confidence, was extremely important. I think if I had started here, New York would have crushed me immediately. But there was a nice, warm Vermont bear hug for three or four years that helped me realize that I can do this.

So even when I got here and was still terrible at standup comedy, I understood that I knew how to do it and that eventually I could be good. You're out every night with people who are incredible, people who are your heroes, and you pick up from them.

SD: It's funny you say that you were terrible. I always thought you were really good, and you were certainly regarded as one of the better Vermont standups while you were here. So at what point did you realize that you actually were good at this?
CL: I don't know that I've ever felt that way. [Laughs] Somebody posted a show from Levity from maybe five years ago, and I cried watching it — like, cried in a bad way. It was so bad! Like, People let me do this? It's cruel, so mean to make people listen to this.

But you have to start somewhere. You have to be bad for so long. And I still don't think I'm that great at this. But I've gotten better and figured out jokes here and there, I guess.

SD: Do you have any advice for Burlington comics? And it can't be to move to New York, because we need them here.
CL: Oh, gosh, no. Don't move to New York! [Laughs] It's different for every person. Some people just want to be famous, but that's not gonna pan out. But I think if you love it, you'll find a way. It's hard, and you're gonna suck for a long time. But if your heart is in the right place and your goal is to make people happy, I think that's a noble enough pursuit.