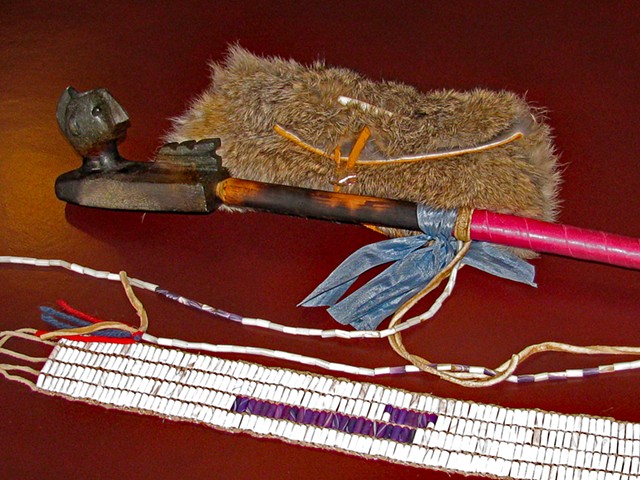 In early May, Burlington Mayor Miro Weinberger's office announced a new partnership with the Vermont Abenaki Alliance. The collaboration grew out of controversial discussions over the "Everyone Loves a Parade!" mural on Church Street, which not everyone loves.

(If you haven't been keeping up: Calling the artwork racist, Albert Petrarca vandalized the mural's identification plaque in October 2017. Since then, community members and City Council representatives have been debating whether to replace or alter the mural to depict a more accurate history of Burlington.)

The focus of the City and Abenaki Alliance collaboration will be public events and education about native people and history. The release notes a July 7 event on Church Street and, in the future, a permanent exhibition at the Burlington International Airport.

Chief Don Stevens of the Nulhegan Band of the Coosuk Abenaki Nation (one of four bands that make up the Vermont Abenaki Alliance, according to the press release) says he first spoke publicly at a city council meeting this winter.

"People were starting to talk on our behalf," Stevens says over the phone. "I wanted to go to that meeting because I wanted to tell the council that we speak for ourselves, and, if they have any questions, they should talk to us directly."

Stevens places emphasis on autonomy for minorities when speaking on the issue. "I'm not saying the mural is OK or not from other people's point of view," he says. "We can't speak for others."

But as for the underrepresentation of Abenaki people in the mural, and the errors in regalia of the singular person depicted — Stevens isn't interested in correcting that particular record.

"I'm looking at the mural as a symptom rather than the root cause of what we have to do," he explains.

The problem, according to Stevens, is lack of education about native history and culture in the state. "If [the muralist] was able to not depict the clothing we wear [when the mural was painted in 2012], then there's a lot of education that needs to happen," he says. "So it's not really whether it offends or doesn't."

Stevens says the apparel on the native person in the mural is closer to Western indigenous culture. In particular, Abenaki did not wear feather headdresses but red moose hair and wampum headdresses "that signify the woodpecker and a crown."

In order to prevent future misrepresentations, the Abenaki Alliance is planning a July 7  event on Church Street with artists from the Vermont Abenaki Artists Association. Stevens says he envisions "interaction with the public to do storytelling, wampum readings — our wampum belts are a form of communication — educating on our stories, and drumming."

Overall the goal will be "allowing people to interact with us and ask us questions and learn about our culture," says Stevens.

He is also fundraising for a permanent installation in the Burlington International Airport. The Abenaki hope to make new art objects for display so that their current inventory — used in schools and traveling exhibits — can remain in circulation for other educational purposes.
"We would like to make sure the items [we display] are top quality," Stevens says. He estimates it might take a year to raise funds to pay artisans to make the display pieces.

"By putting these displays up that are specific to our culture," Stevens elaborates, "it gives an opportunity for travelers and other school children to know that we're not extinct. We're still here."
Prev
Next