A Fourth of Nature for Shelburne, With Muppets | Live Culture

A Fourth of Nature for Shelburne, With Muppets

Anybody out there watching "Twin Peaks: The Return?" (It's OK, I'm still working through it, too.) Or maybe you remember that one meteorologically unsettling scene from Magnolia? How about Donnie Darko's plasmatic time-travel portal? Thanks to last Friday's not-actually-a-tornado — it was a "microburst," according to the National Weather Service — a Shelburne Museum presentation on "Sesame Street" took a turn for the absurd, Lynchian and vaguely apocalyptic.

And now this arts writer gets to experientially report on the weather, among other occurrences.

The evening of Friday, May 4, started benignly enough. The guy who sold me gas and seltzer at the general store told me a tornado warning had been issued, and that I might want to move anything outside, inside. I thanked him, knowing full well that tornados aren't really a thing in Vermont.

According to NWS local meteorologist Paul Sisson, "There were no tornado warnings — there was a tornado watch."

The difference is subtle. As Sisson put it, "Conditions in the atmosphere were favorable for a tornado," and a "watch" means the weatherpeople were keeping a lookout in case a tornado were to develop. By contrast, Sisson described a microburst as "a strong wind gust that comes out of the thunderstorm, [which] basically comes down out of the cloud, hits the ground [and] spreads out once it hits. Think of taking a garden hose and pointing it straight at the ground."

I picked up my friend and we headed to the 6 p.m. lecture at the museum's Pizzagalli Center. I had previewed "Sesame Street: The Longest Street in the World" for the previous week's Seven Days and was eager to see performer and "muppet captain" Marty Robinson and his wife, writer Annie Evans, in action.

It was mostly an older crowd with a few outliers, including young children and their parents. Robinson and Evans took an informal tone, speaking about the history of the children's show and their work with Sesame Street International, inviting questions from the audience as they went. Meanwhile, a storm was brewing.

What I was there for — what I imagine many other attendees were there for — was the opportunity to see Robinson work his puppet magic. Robinson is charismatic, with long grayish hair à la Craig-Schwartz-as-John-Malkovich — and he did not disappoint. Using a slightly Kermit-esque  rod puppet, he explained how the audience's belief and desire provides one half of a puppet's soul, while the performer provides the other.

In the calm before the microburst, we marveled together at our capacity to believe two opposite things at the same time. #cognitivedissonance

Then the rain started, and things got weird. Wind beat against the state-of-the-art center and the raging water, then hail, grew progressively fiercer. Ever-sensible, the kids were first to leave their seats to peek out the windows and take stock of things. The lights flickered once or twice, then went out.

At this point, the audience took an induced intermission, milling in the lobby and wondering what would become of us. My friend commented on the building's expansive glass walls. Swiftly, the museum staff got back-up-generator power running. Someone wielded a janitor's mop, trying to sop up the water seeping in from under the doors.

The show must go on, as they say, and Evans and Robinson remained imperturbable.  In what seemed a tactic of distraction, Robinson whipped out a much-loved, timeworn Telly Monster. As he operated Telly's left hand and face, Evans slipped in behind him to control the grubby bag puppet's right hand. I, for one, was transfixed, despite the apocalypse banging on the doors. 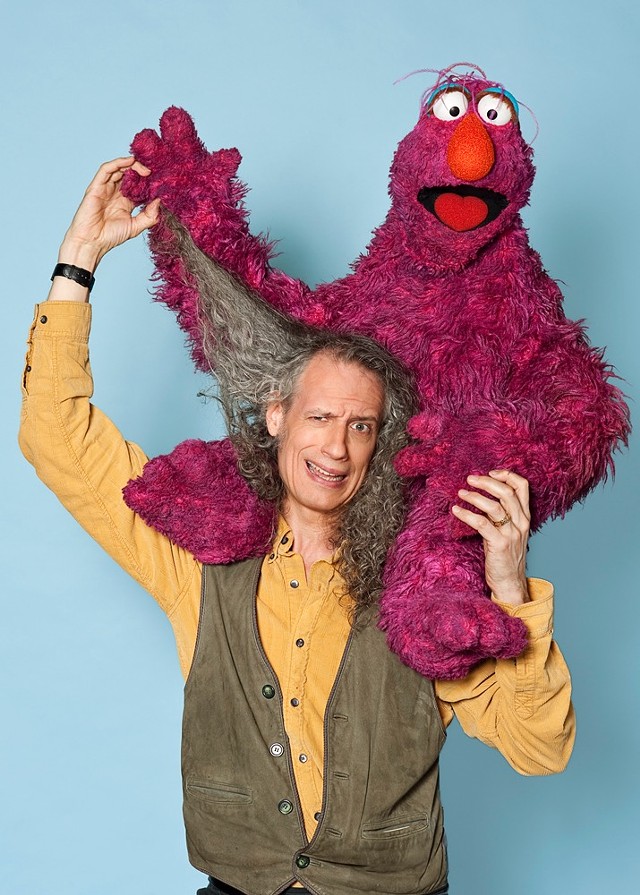 And then, twin girls were handing out pairs of pretend eyeballs from a canvas sack. Evans and Robinson's 9-year-old daughters dutifully distributed them for audience members to affix to our hands. Robinson instructed us in transforming our hands into creatures, and to move only our thumbs once per syllable — the Jim Henson method, Evans commented.

Eyeballs affixed to hands and hands raised in snaky S-shapes, microburst bursting, Robinson led us in a soft round of the ABCs. A roomful of strangers gesticulating with fake eyeballs, conducted by the performer behind Mr. Snuffleupagus? It wouldn't be the worst way to go.

Soon, the museum's director of visitor experience and learning, Karen Petersen, calmly suggested that we, you know, wrap things up before the power went out again, and get home safely to our families. (Read: You don't have to go home but you can't stay here.) A woman in smart, expensive-looking glasses raised her phone and announced that "one more cell is coming."

Shortly after, my friend and I made a break for it, tearing through the parking lot in the rain. Getting back to Burlington was tricky — fire trucks blocked off Route 7 due to a fallen tree near the museum's covered bridge. We were thwarted — by another downed tree — trying to get to Spear Street. I may or may not have driven through a third, smaller tree on the road. Several stoplights were out on the way back to town, and the sky across the lake was an eerie pink.

According to Searfoorce, the museum's power remained out through 6:30 the next morning. The museum closed all day Saturday to begin cleaning up from the damage, which included fallen trees and damaged fencing. 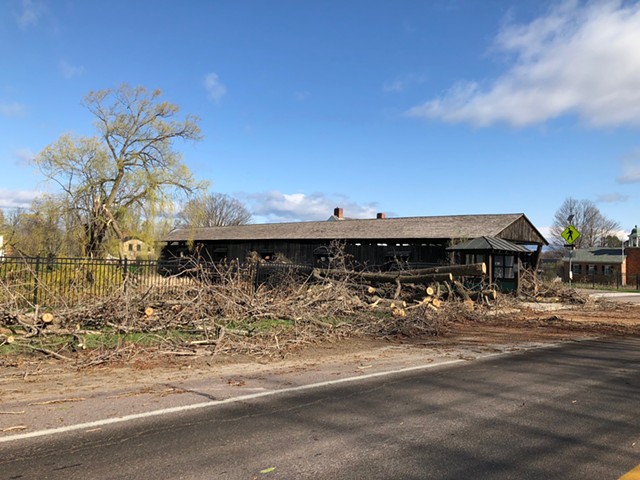 The Shelburne Museum was not the only site to sustain damage. On Saturday morning Simon Plumpton woke to the sight of a plane in his neighbor's trees. The small vintage craft had been blown from Shelburne's private airport.

"This is what happens when you live next to a small airport and there happens to be a hurricane — or what amounts to a small twister," Plumpton said. "The wind just came up and lifted that sucker and put it in the bushes."


"I’ve never experienced weather like that anywhere in the states," continued Plumpton, who has lived in Vermont since 1987. "In my 49 years on the planet, I’ve never seen anything like that. It was otherworldly."

Meteorologist Sisson noted that Shelburne certainly wasn't the only place hit by the inclement weather — there were reports of strong storms and gusts "all over New York and Vermont," including golf-ball-size hail in Richford.

"A tree falls in the woods, no one hears it," Sisson said wryly. "When it hits a neighborhood like [Shelburne], it’s a big deal."

Sisson did concede that this particular weather event was "on the stronger side of any of the storms we’ve had."

As for me, the next time a storm strikes, I'll make like a muppet captain: Get out my fake eyeballs and stay calm.
Prev
Next