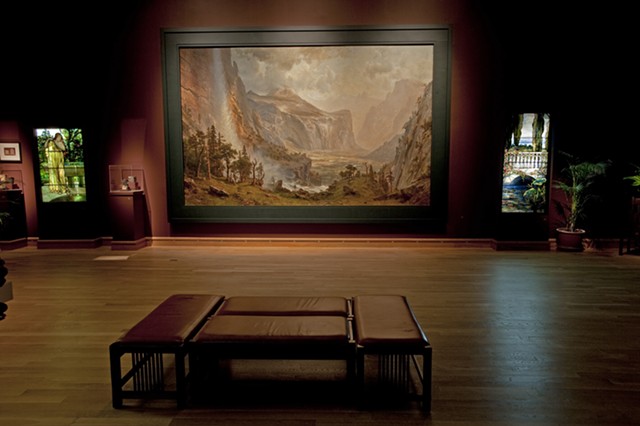 Last October, Albert Bierstadt's massive 1867 painting "The Domes of the Yosemite" left its permanent home at the St. Johnsbury Athenaeum for restoration. It was carefully rolled around cardboard tubing and driven to Miami, Fla., where conservationists at the ArtCare Conservation Studio repaired the weakened canvas, removed a synthetic varnish applied in the 1950s, and performed some minor inpainting.

The 10-by-15-foot painting, commissioned by a Connecticut financier in 1867 and sold at auction to a member of the Fairbanks family shortly after, has resided at the Athenaeum since 1873. But before it returns home, it's making a pit stop at the Charles Hosmer Morse Museum of American Art in Winter Park, Fla., about three hours north of the conservation studio.

This is the first time since its installation at the Athenaeum that Bierstadt's painting has been shown outside of St. Johnsbury.

At first glance, the stopover seems strange. But a recent press release from the Athenaeum explains that the Morse Museum has a connection to Horace Fairbanks, the founder of the Athenaeum, and to St. Johnsbury.

Charles Hosmer Morse was an employee of the Fairbanks family and an eventual cofounder and partner in Fairbanks Morse & Co., the manufacturing company launched by Thaddeus and Erastus Fairbanks. Thaddeus founded the Athenaeum and his nephew, Horace Fairbanks, procured the Bierstadt for the museum. Morse's granddaughter, Jeannette Genius McKean, founded the Morse Museum in 1942 and named it after her grandfather.

That connection was common knowledge to Athenaeum director Bob Joly, who says his museum tried to get in touch with the Morse Museum "years ago," but that an alliance "didn't take for whatever reason." When he reached out to the Elizabeth Morse Genius Foundation  — the organization that funds the Morse Museum — after the painting departed for Miami in October, he says its board members were more amenable to some form of partnership.

The nonprofit agreed not only to showcase the painting at the Morse Museum but to donate $100,000 toward its continued care. 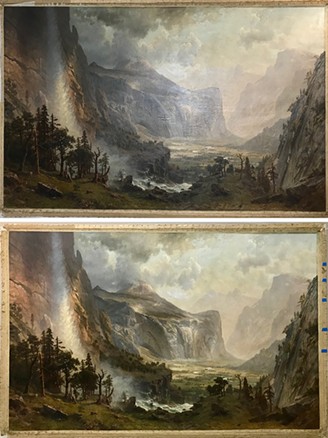 "The Domes" will be on view in Winter Park until early July and will return to St. Johnsbury shortly after. A series of events, including talks with Sen. Patrick Leahy (D-Vt.) and Sen. Bernie Sanders (I-Vt.), are planned for that time.

"The people who live in this town haven't seen this painting," Joly says.