When she was growing up in a refugee camp in Nepal, Neeru Cvakoti used to watch her sister dance while their brothers played the accompanying music live. "Tabla, flute — they had a crew," Cvakoti recalled.

Today, such performances are "impossible" in the U.S., said the now Winooski-based dancer. "We have so many bright artists from our Bhutanese community," she explained. "But they live in different states."

That makes finding a backing band difficult. So when she performs, Cvakoti dances to music that she has downloaded on to a pen drive. She does the same when she teaches.

These days, Cvakoti, 24, plays an active role in nurturing a newer generation of Nepali-Bhutanese performers. When she lived in Pennsylvania, Cvakoti opened a dance school. When she relocated to Vermont last year, she wanted to continue following her passion for dance and teaching.

So she approached Bidur Rai and Bishnu Khadka, who, coincidentally, were looking for a new dance instructor for their youth group, the Vermont Nepali Heritage Dance.  The trio has been working together since last November. Practice is held every Saturday and Sunday afternoon at the Old North End Community Center on Allen Street in Burlington.


According to Cvakoti, Nepali dance has two genres: classical and folk. The former is based on ancient classics, while the latter is based on the traditional dances of particular communities. Though she isn't from the Gurung or Rai families, Cvakoti picked up the folk dances specific to those groups because she used to watch her neighbors perform them in the refugee camp.

In folk dance, "we have to use [our] whole body," Cvakoti said. In classical dance, she explained,  emphasis is placed on eye and head movements. 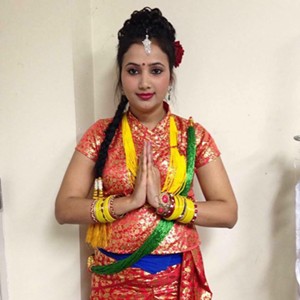 Cvakoti has never had any formal dance training. But that didn't stop her from winning a dance competition when she was about 12. Dancing and teaching others to dance were simply what she and her friends did at camp, she said.

Dancing remains an integral part of the Nepali-Bhutanese diaspora's culture. This is underlined by the popularity of the Mero Dance Cup, an annual competition that gives the younger generation in the U.S. a platform to showcase their skills.

Cvakoti admits that it's challenging to teach her current students because they don't always understand the Nepali songs. So she has to make time to explain the lyrics, especially as they relate to specific movements.

For example, in Nepali "maya" means love. So, whenever they make the action for maya — drawing folded arms close to their chest — Cvakoti reminds her students to smile. "Facial expression is very important," she said. "Doing random steps with music is not a dance," she added. "You should feel the music."

But the most important lesson Cvakoti wants to impart to her students is pride in their culture: "Don't be shy to say we're Nepali — it's cool."

Cultural Mosaic is a series about performing artists in Vermont from diverse ethnic and cultural backgrounds. Got an artist we should know about? Let us know!