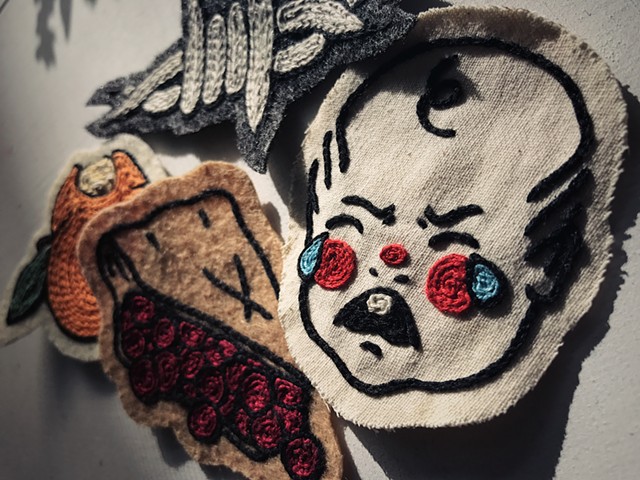 Welcome back to Style Points! We took a holiday break but are diving into a new year that will surely be filled with flair. Enter Emma Fern, the nimble needleworker behind Bad Luck Goods.

It's safe to say that Fern, 21, has a lot on her plate … or in her sewing basket. In addition to her budding embroidery company, she's a full-time art student at the University of Vermont. Fern also works at Common Deer in downtown Burlington.

When she's not running between classes or helping folks find their just-right, American-made treasure at the store, Fern is busy stitching small patches and large denim back pieces for her customers. She's been sewing and embroidering since she was a teenager, and started Bad Luck Goods last year.

Initially, the designer wanted to create intricate, hand-stitched lingerie. She soon found that was a hefty undertaking. Now, she collaborates with Salt Lake City-based lingerie designer Wildfire Undies and plans to shift her focus from patches to embroidered denim clothing over the next few years.

Fern's work shows the influence of contemporary graphic design, American traditional tattoo stylings, and iconic Nudie suit flair. We talked to the budding designer to hear more about her plans for 2018.


SEVEN DAYS: Embroidery has been getting a lot more attention as an art form recently.

EMMA FERN: Yeah, absolutely. It's pretty awesome, and also a little intimidating. It's because you have a community start to form, but competition starts to form, too. But it's fun to see it happening with Nudie's Rodeo Tailors [reopening] and all that stuff. That's my dream. And there's a group of girls in Austin right now called Fort Lonesome, and that's what they're doing [Western- and Nudie-inspired embroidery.]


SD: Traditionally, embroidery is perceived a super-feminine art form. I hate the word "edgy," but your designs have a little edge.

EF: Yeah. I was exposed to embroidery through [my] grandmothers and doing it in the very traditional way. They have their sampler and the bouquet of flowers, which are really beautiful but not something that really aligned with my own style, ever. I've always been into vintage clothing, and [embroidery is] something, I think, that appears a lot vintage. And we just don't get good-quality embroidered items anymore. So, I want to be able to provide things that people who have a sort of contemporary graphic design sense can relate to and want to wear.

SD: Do you do it all by hand or with a machine?

EF: I do it by hand, which is pretty time-intensive. That's the one thing that has, sort of … I don't want to say it's held me because I love doing it by hand; it's really therapeutic and meditative. But it's hard to do wholesale orders. People have approached me with big orders that I just can't do, especially with being a full-time student and having a part-time job. Right now, my No. 1 goal is to get some embroidery machines going.

[My boyfriend and I] just bought one, and it's beautiful. I wanted to stay away from the digital embroidery machines and do something that felt a little more analog, so we got an old Cornely. It was built in 1842 and has the plaque of authentication. It's my baby right now. It's missing some parts, so we have yet to get it up and running, but we're getting our own little mini studio going.

EF: He's my low-key personal photographer. He's been involved and really supportive from the beginning. He's seen all the stages and, at this point, as I'm looking to expand, he's picked up a lot of things [with the business.]


SD: What does your production time look like, with the machines?

EF:  Right now, a custom jacket could take me six months to complete. So, having one of the machines, I could easily cut that time more than in half, maybe quarter the amount of time. There's definitely going to be a learning curve, I'm going to have to figure out how to use this. But to be able to keep my commissions open regularly — that's my goal. I love doing patches, but I want to be working with clothing. That's my focus. SD: Your back patches are probably cheaper than a tattoo of the same size — which is kind of crazy. But, beyond price, it seems like there's some sort of connection there.

EF: When I was in Athens, [Georgia], I actually worked at the counter of a tattoo shop, and my first couple of commissions were for artists that worked there, so we did a lot of trading [embroidery for tattoos]. I definitely learned a lot about the value of your own artwork and pricing out your artwork for people. Working there taught me so much. And my art style is very heavily influenced by traditional tattoos.

EF: One of my long-term plans has been to release a vintage line. At some point, after I get mechanized a little more, I'm going to start amassing a vintage collection, probably focusing on denim or canvas, and start customizing them, repurposing them, and release them.

EF: Going back to the whole "embroidery as traditionally feminine," I definitely think about [Hannah Hill's] embroidered meme [riffing off the popular Arthur meme of a clenched fist, hers depicting a fist around a needle that reads, "When you remember historically, embroidery hasn't been taken seriously as a medium because it's 'women's work'"] — I need to frame that and put it on my wall.

As a woman in the art scene, I do feel constantly underestimated. And I think that doing something like this — people see it and are like, "Holy shit, I could never pull that off." It's a good platform to be able to reintroduce the importance of textiles and slow fashion and responsible buying and supporting small businesses and local makers. What I do is just one avenue into that.

Style Points is a recurring blog about Vermont's designers, stylists, fashion mavens and textile-oriented entrepreneurs. We'll look at everyone from up-and-coming Etsy folk to independent designers to established apparel institutions. Do you fit the bill? Do you know someone who does? Email sadie@sevendaysvt.com.