Moran Plant Mural Has Been Vandalized 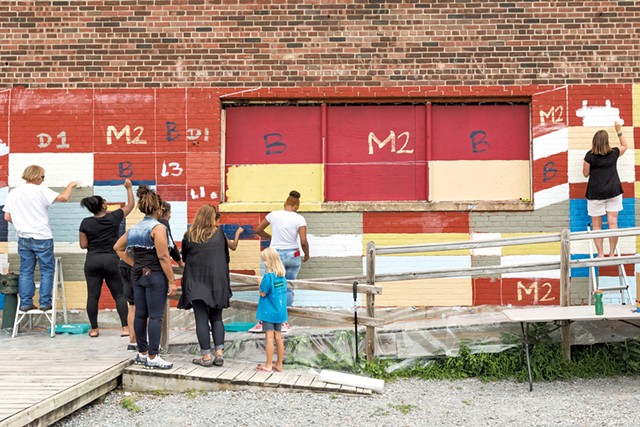 The original mural was created in August 2015 and was a collaboration of artist Clark Derbes, 10 kids from the King Street Center, nonprofit developers New Moran and more than 40 community members. At the time,  Derbes told Seven Days, "I think the kids that were there will maintain a sense of ownership over that project," referring to the then-anticipated redevelopment of the Moran structure by the New Moran team.


While some might be offended by the content of the tags, Derbes remains relatively neutral. "I have had my work tagged so frequently that I truly do not care at all," he wrote in an email.  "Instead, I look forward to painting over some sections of the graffiti with additional smaller rectangles, yet leaving some of the graffiti, thereby abstracting [and] subverting the vandalism into art.

"Children getting their hands on spray paint is a given," Derbes continued. "Using their 'efforts' to enhance the mural seems the only logical [next] step." Vicky Smith, director of King Street Center, was less forgiving.  "We were disappointed to learn about the defacing of the vibrant mural at the Moran Plant," she said.  "I'm not too familiar with the rules of street art, but I don't believe that it's appropriate to add to the artwork unless you are working with the artists and have their permission.

"I know the kids involved [in] this effort would be very discouraged to see their work tagged," Smith added.

It's worth noting that the Moran artwork is not "street art" but an approved mural executed by an artist collaborating with the structure's project coordinators and community members. Generally, street art refers to works that haven't been approved.

"The frustrating part of this," Derbes wrote, "is that if they had just used that same effort, but instead drawn something, anything: a guitar, switchblade, lighting bolt, hand, etc., it would have looked so damn cool."

At the time of posting this, the City of Burlington had covered up the tags with spray paint in not-quite-matching colors.