Katharine Montstream's paintings seem to be as ingrained in Vermont's  cultural landscape as the scenery they often depict. No wonder — she's been doing it successfully for 30 years.  Now, in honor of that milestone, the artist is offering an unusual giveaway: Every day for the next 30 days, Montstream is painting somewhere in Burlington. Whoever finds one can keep it.

"It's been 30 years of selling paintings in Burlington," Montstream said, "and it's pretty remarkable to me. I was looking in my garage one day and was like, I have so many paintings, what do I do with them?"

It wasn't just her overflowing garage that got Montstream's gears turning. In part, her giveaway is a response to the city's recent decision to forgo redevelopment of the Moran Plant. She served as a board member for the New Moran team and exhibited paintings in the waterfront space in 2016.

"I feel bad, and I want to do something that feels good," Montstream said. "It's going to be fun."

As for her finders-keepers project, she says,  "I think about it as an experiment — what's going to happen if I do this?"

Montstream said she's placing her paintings in some of her favorite Burlington spots, but some unfamiliar locations, as well. "It seemed like an exciting way to thank the community," she said.

The works are a mix of oil and watercolor paintings. Montstream said the oils should hold up just fine in case of inclement weather, and that the watercolors will be wrapped in plastic to ward off any rain. Some are as small as 5 by 7 inches; others are 24 by 24 inches. The value of the work is hard to determine, Montstream said, since many of them are older and hence much different than her current work.

Some members of the community are already grateful recipients of paintings. "We put the first one up yesterday," Montstream said. "[My daughter] Charlotte hung it and a lady walked by and took it within five seconds."

Yesterday morning, the artist posted on Facebook a photo of a painting she left at North Beach— but said she likely won't continue to give hints. That work has been claimed, as well, by Leah Stewart. 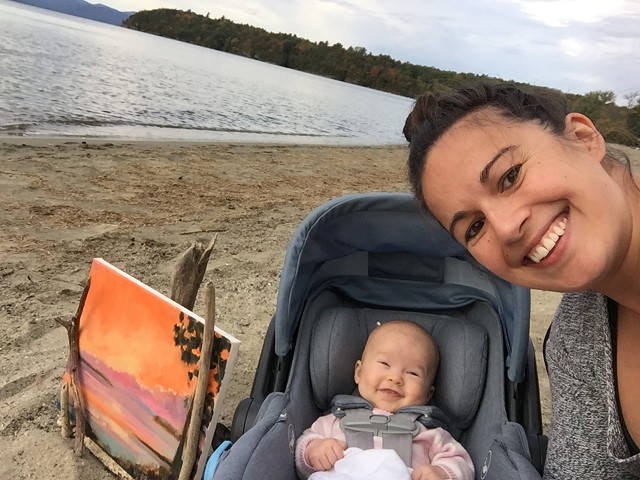 Stewart said she doesn't know Montstream personally, but she happened across the Facebook post. "It had been 20 minutes since she posted it," Stewart wrote in an email. " I figured by the time I got my baby ready and we headed out the door, that it'd surely be snagged up, especially since [the first] was snagged within seconds. But a morning walk along North Beach made the adventure a win-win!"