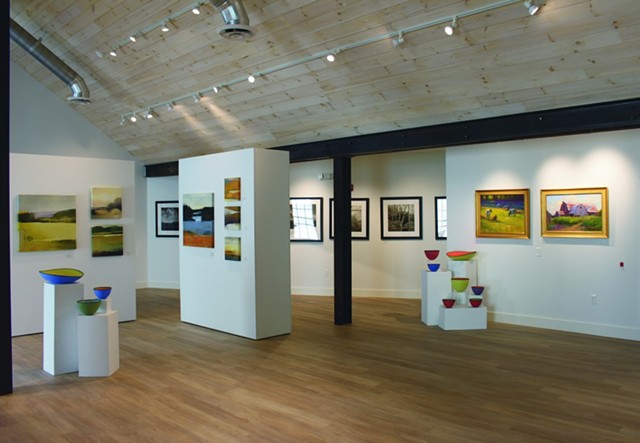 Earlier this month, Middlebury's Edgewater Gallery opened a third location in downtown Stowe with the logical name of Edgewater Gallery in Stowe. The gallery's marketing and design manager, Dalton Hartye, said the team has been "discussing the idea of expanding for quite some time, and, after much consideration, we decided that Stowe would be the best location for a good market for us."

Owned by George Dorsey, the gallery's first location opened in 2009 on Middlebury's Mill Street, filling the space that the Frog Hollow Vermont State Craft Center had occupied since 1971. A second location, named Edgewater Gallery on the Green, opened just a couple of blocks away on Main Street in the summer of 2015. Though not officially in the "Edgewater" family, a third venue, the Old Main Gallery in Bozeman, Mont., is noted on Edgewater's website, as well, and shares some artists with its Vermont counterparts.

Hartye said Burlington was seriously considered as a location for the new gallery. "The reason we went with Stowe," he said, "[is] there's alternate peak seasons. Middlebury is more summer based, whereas Stowe is more winter based."

Edgewater Gallery in Stowe features works by "some of our strongest artists," Hartye said, including Irma Cerese of Massachusetts, Timothy Horn of California and Rory Jackson of Vermont. One new artist joining the roster in Stowe is Matt Brown of Lyme, N.H., who makes woodblock prints using the Japanese hanga method. Hartye said the new location also will be the site of an in-progress, large-scale sculptural work by Jonathan Ebinger.

Though the Stowe gallery is smaller than its Middlebury counterparts, the new space is "very clean, very airy and open," Hartye said, adding, "We've had great traffic through here."

A grand opening is scheduled for mid-October, with an exact date to be announced.