Words Out Loud, in the Middle of Nowhere | Live Culture

Words Out Loud, in the Middle of Nowhere 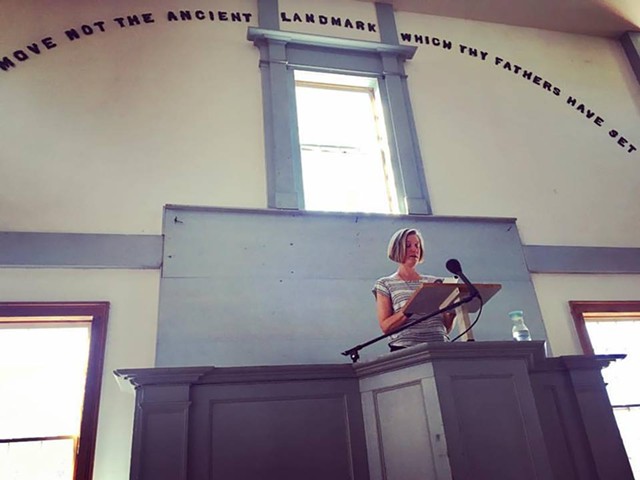 Art at the Kent is a quintessentially Vermont experience: a large, important art exhibit in the middle of nowhere. The venue is the Kent Museum, in East Calais, a historic 1830s brick and wood building owned by the State of Vermont that lies at a dirt crossroads. Driving the mostly empty rolling hills earlier this month to the opening of “Refuge,” this year’s art exhibit, I was sure I had lost my way — until I began passing lines of parked cars on both sides of the road extending half a mile from the building.

I returned on September 24 for one of three Sunday poetry readings in the related series “Words Out Loud.” These occur down the road from the Kent, at the Old West Church, and finish with wine-and-cheese receptions amid the art. Again, cars lined the road in both directions. 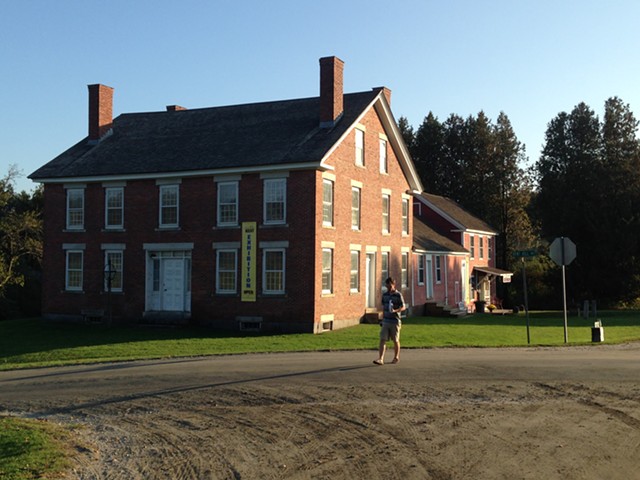 The church is open year-round — there's no lock on the door of this completely original 1832 structure — but carpe diem comes into play with the Kent: It’s open only one month a year, thanks to the volunteer efforts since 2007 of three East Calais residents who happen to be curators: Allyson Evans, Nel Emlen and Vermont state curator David Schutz.

A fourth, poet Mary Elder Jacobsen of North Calais, started curating the accompanying poetry series four years ago. Each year, she chooses poets whose work reflects the theme of the art exhibit in some way. The title “Refuge” is meant in part to echo the Kent’s original purpose: It was constructed in 1837 as an inn for travelers on the once-busy byway, and served as such for about 10 years.

Sunday’s readers were Burlington poet Alison Prine and Shaftsbury poet James Crews — both of whom, it could be said, take refuge in crafting language. Prine lost her mother in a car accident when she was a young child, and lost her brother to suicide as an adult. Crews’ father died when James was 20. Loss, Prine said between poems she read from her book, Steel, and a manuscript, is her primary subject.

Steel won the 2016 Cider Press Review Book Award, and, the night before, Prine had attended the Vermont Book Award gala as a finalist. The poems she read often ended in unforgettable images, fittingly for a series related to art. In the case of “Rearview Mirror: January,” the image is also hauntingly suggestive. The memory of her mother’s death, the final stanza reads, “comes back like the sound /of those old rotary phones — /the one choking ring they make /when they’re slammed against the floor.”

Between poems, the only audible sound apart from audience murmuring was the buzz of flies, or perhaps bees. It’s still 1832 in the Old West Church. The poets read from the original pulpit, an elevated fire-and-brimstone construction that positions them high above their listeners. The latter sit on benches in square box pews, made from white pine, with posture-straightening vertical backs. “You’re such a lovely, quiet audience,” Prine joked. “Everyone is being very good in church today.”

As Schutz later informed me, the layout of the seating, as well as the second-story gallery, which wraps around three sides, was nostalgic for its time. The Calais residents who built the church were only one generation beyond the settlement’s founders; they looked back to the 17th-century Massachusetts churches they had known for models. They built the Old West to accommodate all faiths and funded it by selling box pews. I sat in number 38 — for which V. Allen paid $40, according to a copy of the original pew chart hanging in the narthex. (Not those Allens, Schutz assured me.)

Whereas Prine read with a tone steadily infused with the emotion of her subject matter, Crews chose to let the words alone convey emotion. It was a Crews poem that drew me to the reading. Once, last year, I came across a work of art by Felix Gonzales-Torres in the Met Breuer in New York City that consisted of a pile of colorfully wrapped candies. The artist, the guard informed us, meant for visitors to eat them, and he replenished the pile regularly.

Long after my ill-informed amusement had faded, I discovered that Crews had written an entire book of poems about Gonzales-Torres. One — “Fan Letter” — left no doubt as to the emotion captured in the artwork, which was calculated to weigh the same as the artist and his lover just before the latter died of AIDS. The poem’s speaker observes one man “bent over your sculpture / popping piece after piece in his mouth / chewing and sobbing.”

At the reading, Crews read from his most recent book, Telling My Father, and a manuscript, but his newer poems conveyed the same attention to relationships and community. His book title stemmed from the fact that Crews never came out to his father, he informed the audience, “but I think he knew.” The title poem describes the morning his father noted “traces of last night’s eyeliner.” “Out late was all he said. And then smiled, / rubbing the small of my back through the robe.”

Another poem, “Kindness,” is an appreciation of life in small-town Shaftsbury, where solicitous neighbors ask after each other’s wife or knee in talk that “we insist on calling small.”

Audiences have one more chance to find refuge at the Old West Church next Sunday, when Greg Delanty and Madeleine May Kunin will read their poems, followed by small — and thereby crucial — talk at the Kent.

"Refuge: Vermont Artists Respond" is on view Friday through Sundays 10 a.m. to 5 p.m., through October 8.