The high-definition programming runs on Channel 216. According to a June 26 press release, it carries "different programming than RETN's current standard-definition educational access channel found in the BT channel lineup at Channel 16."

The first local film to debut on the new channel was "Anonymous" by Alec Julien, by Burlington writer, educator, musician and graphic designer. Seth Jarvis directed. The first-time filmmaker said that RETN provided equipment for the production, and that executive director Jess Wilson served as the lighting director.

"When she asked me to premiere "Anonymous" with RETN, I was happy to oblige," Julien said.
According to the RETN website, "Anonymous" is an experimental film that "explores the frustrations of unrealized ambition and the pleasures of strange partnerships and the creative endeavor." 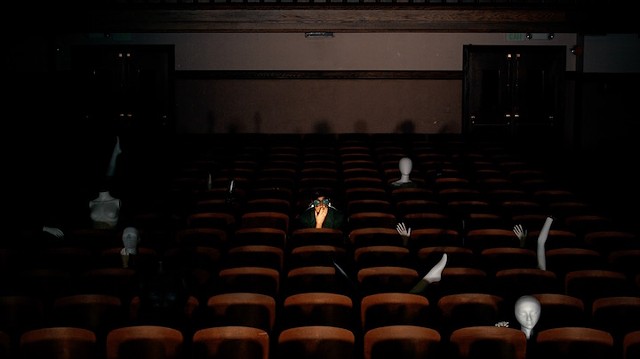 Wilson said, "Local films will be part of the regular channel schedule, but there's no set schedule, like, 'Tune in at 8 p.m. on Tuesdays for a local film.' That could come in the future," she added, "but right now they will just be woven throughout the regular schedule."

Wilson also noted that the channel will feature "local music like [Vermont Youth Orchestra] concerts, artist profiles, music videos from local musicians, Democracy Now! and other local shows devoted to [the] exploration of arts and community in our region."

Films and other programs will be selected by RETN staff, Wilson said. Preference is given to work connected to the local community via subject matter or filmmaker.

The next film on the roster is 'High Water Mark: The Rise and Fall of the Pants,' by Bill Simmon. Details about air times are forthcoming on the RETN website. People who subscribe to BT cable services can find more info in the interactive program guide on their remote, said Wilson.

According to the Vermont Public Service Department, 2,284 households subscribed to Burlington Telecom cable services in 2016. All of those subscribers have access to Channel 216. Although the number pales in comparison to Burlington's 42,211 residents, Julien said that number is "nothing to sneeze at," adding, "I've played plenty of jazz gigs for an audience of five."

Abbie Tykocki of Burlington Telecom reports that the U.S. Census claims an average of 2.2 people per Burlington household, thus 5,025 residents have access to BTVHD through Burlington Telecom, along with students at the University of Vermont Davis Center served by the local telecom company.

Asked if he thinks the new channel is a good platform for area filmmakers, Julien responded affirmatively. "The Burlington area is chock-full of creative people," he said. "And the more you put yourself out there locally, the more connected to the local creative community you become.

"If I have one interesting conversation about 'Anonymous' with someone, because of its premiere on RETN," Julien said, "that's one more set of creative ideas and people I have access to."

The focus on promoting local cinema is not new. Last year, Vermont PBS added "Made Here," programming dedicated to works by Vermont artists.

Other avenues for locals include the Regional Film Showcase of White River Indie Festival and the Vermont Filmmakers' Showcase at the Vermont International Film Festival.

Clarification, July 18, 2017: This article has been updated to reflect the number of Burlington residents who have access to BTV HD.