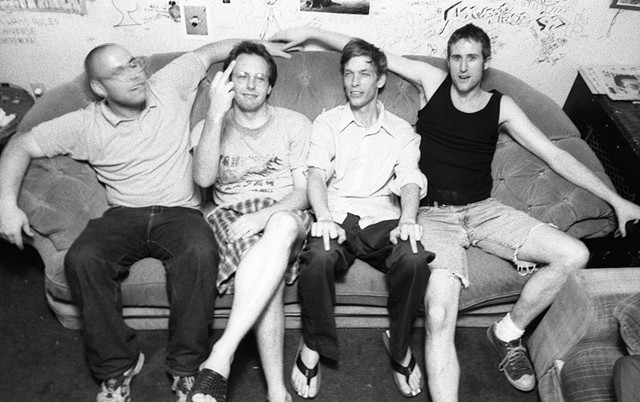 Defunct for nearly two decades, the Pants may eventually be relegated to the clothes hamper of local rock history. But for now, precious few Burlington bands from the 1990s still garner as much adulation and acclaim as Tommy Law, Pistol Stamen, Hutch and Tad Cautious — aka Tom Lawson, Paul Jaffe, Eric Hutchins and Neil Cleary.

The quartet played a sold-out reunion show in 2006 at the Higher Ground Ballroom in South Burlington. In turn, that gig inspired a documentary by local filmmaker Bill Simmon, High Water Mark: The Rise & Fall of the Pants. The flick's premiere at the HG Ballroom last year included a tribute concert featuring front man Lawson and a slew of guests backed by local rockers Swale.

Despite the renewed attention on the group, unless you had hard copies of their long-out-of-print albums — or if I made you a mixtape in high school — actually finding their music was tricky. That changed recently when Pants drummer Cleary built a website and uploaded the band's entire discography to streaming services — Spotify, Apple Music, etc.

In an email, Cleary writes that the recent debut of the Pants doc on Vermont Public Television and its upcoming showings on Maine Public Television in July, "gave me a little burst of motivation to create a modest online presence for the band." (In case you haven't seen it, the film plays this Friday, June 23, at 8:30 p.m. on Vermont PBS Plus. Vacationland Pants fans can catch it on July 27 and 29. Check your local listings.)

All three of the Pants' proper releases are now available to tickle your nostalgic feels, including their self-titled 1994 debut, 1995's Fred Sex and the band's 1998 swan song, Eat Crow. Also available is ¡Viva Los Pants!, a 2006 rarities compilation. It includes cuts from the ’94 record as well as the band's cover of Phish's "Golgi Apparatus" for the Good Citizen comp Burlington Does Burlington.

That release also features several cuts from the Pants' exceedingly rare cassette, Live at the Last Elm Café, an acoustic show recorded on Valentine's Day in 1996 at the long-gone Old North End hangout. Among the highlights are unplugged versions of ballads "Wounded (You're So Fine)" and "Them Stones," unreleased tunes such as "Rock and Roll" and "Both Eyes Closed," and an adorable cover of the Muppets classic, "The Rainbow Connection."

Does the sudden online activity suggest new Pants endeavors in the works?

(Disclosures: My brother plays in Swale. He, my sister and I appear in High Water Mark. And I am a shameless Pants fanboy.)